Fidelia Esther Darmahkasih and Hilary Maiberger will both be performing in Jarkarta, Indonesia this month. Esther, a current BGSU student will be singing a concert in the Goethe House May 30. She will be assisted by Jacqueline Berndt ( flute major at BGSU) and Ivana Tjandra ( former piano major also from BGSU). Hilary, a former voice major at BGSU will be singing Belle with the international tour of Beauty and the Beast in the Ciputra Artpreneur Theater from May 26 to June 30.

Dedication. Enthusiasm. Passion. When asked to describe what Kathleen McGrady ’81 is like as a mentor and teacher, these are the three words most used by her students and colleagues. Her passion for teaching music is one of the many reasons McGrady was named Ohio Music Education Association’s (OMEA) Music Educator of the Year.

“I really have a deep passion for teaching music,” she said. “I just love the gleam in their eyes. You can’t put a price on something like that.”

For 33 years, McGrady has been teaching music. During her time at BGSU she participated in several groups including the Falcon Marching Band, Concert Band, Jazz Lab band and Tau Beta Sigma sorority.

“Being a music major was really special and there were wonderful music professors when I went there,” she said. “All of my mentors, and teachers were so inspirational to me.”

After graduating from BGSU, McGrady went on to receive her master’s degree in music education from Vandercook College of Music in Chicago.

From there, she went on to teach band in the Northwood school district, where she was named Teacher of the Year in 1996. At the time, there were only 12 students in the band but she was able to build the program up to 80 students within eight years.

After 17 years in Northwood, McGrady was hired to teach music with Springfield Local Schools in Holland, Ohio. As director of bands, she instructs the 6th, 7th and 8th grade bands, the Blue Devil Marching Band and the High School Symphonic Band. That’s 450 band students she teaches every day. For the past few years, she has called on BGSU’s College of Music for help.

“BG has been really special about giving me a student teacher every year. They’re helping me just as I’m helping them. They’ve been great,” she said.

One of them is senior Ryan Williams.

“She put me on the podium the second day I was here,” he said. “She has a lot of energy and has given me advice on how to talk to the kids.”

When asked what advice she would give to Williams and other current students, McGrady said, “Put yourself around a lot of positive people and people who make you laugh.”

This year, her student teachers were able to help McGrady prepare the 8th grade band for its performance at the Ohio Music Education Association’s conference in Cleveland—the only middle school band in Ohio selected to perform.

“I can’t tell you how much of an honor this was for our band students, band program and the community,” McGrady said. “To be selected to appear at this state conference was huge!”

One of the songs that the band performed had a BGSU connection. “Evocation” was written by Ryan Nowlin ’00, ’04. He is the assistant director of The President’s own United States Marine Band. Nowlin wrote the song for the Ohio Chapter of the International Bandmasters Fraternity, Phi Beta Mu, of which McGrady is a member. Phi Beta Mu asked McGrady to premiere “Evocation” at the OMEA conference.

“It was such a beautiful piece of music. This was such a treat and an honor for our 8th graders,” she said.

At that same conference, McGrady was honored as Music Educator of the Year. This is the third year in a row that a Bowling Green State University alum received the award. The last two winners were George Edge ’79 and Barry Hartz ‘82.

McGrady’s collegue, Travis Pennell, nominated her for the award. In his nomination letter he said, “She teaches her students to strive for excellence, to love music and to respect each other. She teaches all of us, her peers, to give our best for our students, to wear a smile, to have faith and to remember that the storms in life can often produce beautiful rainbows.”

Several of McGrady’s collegues wrote letters of recommendation to OMEA, including Bernice Schwartz, who worked with her for 14 years. Schwartz described McGrady as an inspiration for her students.

“She provides her students with an abundance of opportunities and strives to help every one of them succeed both in and out of the classroom,” she said.

Schwartz remembers a time when a student was at risk of not graduating due to too many absences. McGrady developed an incentive program so that he could pass.

“She genuinely cares about every student and will do whatever it takes to make sure they succeed,” Schwartz said.

McGrady recalls another time when a band student’s parents lost their jobs and couldn’t afford to make the payments on their child’s instrument. So she stepped in to help.

“If a child doesn’t have an instrument, I’ll find it in a flea market if I have to. It’s just how I grew up—in an Italian Irish home. You give, you are kind to people. That’s what I was taught,” she said.

McGrady has won many other awards including: Springfield Middle School’s Teacher of the Month, Springfield High School’s “You Made a Difference Award,” and “Outstanding State Chair Award” at the 2014 American School Band Director Association’s 60th National Convention. She currently serves on the BGSU Alumni Band Board and is involved in the Ohio Ambassadors of Music, which takes 100 students to Europe every two years to perform. The trip is organized by Dr. Bruce Moss, director of bands and professor at BGSU.

McGrady maintains an active schedule throughout the year as a guest conductor and serves OMEA in several capacities including All-State Ensemble Chair for the 2016 Conference in Cincinnati. She will retire in May but doesn’t plan on relaxing for too long.

“I have 10 more years in me. My resume is ready to go. I’m looking for something at the next level,” she said. 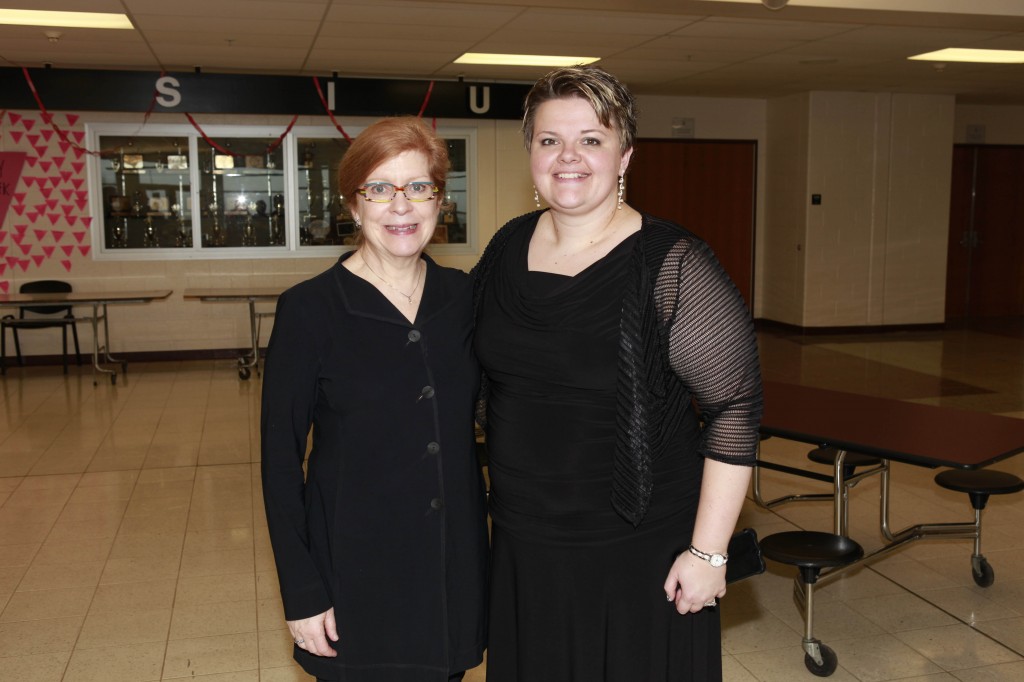 Emily Freeman Brown, Director of Orchestral Activities at BGSU, guest conducted at the PMEA (Pennsylvania Music Educators Association) Region VI (Philadelphia region) Orchestra festival. It took place March 12-14 at Oxford Area High School. The program was Summerstock Overture by Samuel Adler (who met the orchestra and spoke to the audience at the concert); Carmen Suite No. 1 by Georges Bizet, the Scherzo from Anton Bruckner’s Symphony No. 4 and the Finale from Tchaikovsky’s Symphony No. 5.

Last week-end sophomore music performance major Chi-Him Chik was named winner of the 55th Annual Young Artists Competition as sponsored by the Lima Symphony.  Chi-Him  won 1st prize in the College Woodwind and Brass Division and was honored with a $600 prize and possible concert with the Lima Symphony.  He performed “Maha Mantras” by Narong Prangcharoen, a concerto which Chik also played with the BGSU Philharmonia on March 1, 2015.  Chi-Him is an international student from Hong Kong who currently studies with Dr. John Sampen.