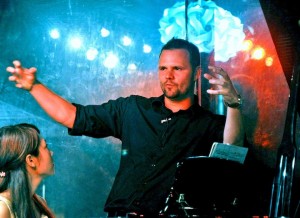 Associate Professor of Piano, Thomas Rosenkranz will serve on the jury for the Shanghai International Open Piano Competition from October 1st-4th. Professor Rosenkranz is currently on a faculty improvement leave living in Chengdu, China.

Solungga Liu, Associate Professor of Piano, has been invited as a guest artist faculty to teach and perform at Atlantic Music Festival, an international summer program in Waterville Maine.  Professor Liu will coach students, give a master class and perform Robert Paterson’s Deep Blue Ocean for Two Pianos (2010) with Sang Woo Kang, Director of the Piano Program at AMF.

When recent Bowling Green State University graduate Rebekah Nelson of Wapakoneta arrives in Berlin later this summer as a Fulbright English Teaching Assistant, she will bring with her an unusual wealth of experience for someone her age, along with a great deal of enthusiasm. Nelson is one of three BGSU students chosen for the Fulbright program this year.

Nelson, who was a double major in German and piano performance through BGSU’s College of Arts and Sciences, will teach English to elementary schoolchildren at the Carl Schurz-Grundshule in the Spandau neighborhood on the westernmost side of the city.

It will not be the first time she has had to be in front of a class of German-speaking students, she said. During her academic year abroad as a BGSU student in Salzburg, Austria, in 2012-13, she had an internship in a “gymnasium,” a school for students from about age 11-18, in which she gave presentations in German on American music.

During her upcoming year in Berlin, she hopes to continue her involvement with music. “I’d love to work as a collaborative pianist with a local theater company or church group,” said Nelson, who teaches private piano lessons at a performance studio in Perrysburg. “It would be another way to engage with my host country, which is one of the goals of the Fulbright program.”

Her experience teaching younger students in piano should be helpful in working with the elementary school children, as will the “communicative approach” used in her current job with ELS Language Services at BGSU, she said.

The service provides intensive English language classes and is often used by people who plan to attend a university and need to meet the English proficiency requirements. “It’s a very interactive, hands-on approach to learning language that incorporates authentic texts and real-world activities, and I think it will be great preparation for working with children.”

In addition to teaching young children, “I also hope to get involved with a nearby high school to set up a cultural exchange program for students who are preparing for study in the U.S.,” she said. “It would also give them some extra speaking experience.”

While at BGSU, Nelson volunteered with Global Connections, a local nonprofit group devoted to helping international students and families adjust to life in the United States by providing cultural and social experiences and support with language skills.

“I like to dip my feet into as many different pools as I can,” Nelson said. “It seems like many of my experiences will directly or indirectly lend themselves to the Fulbright year.”

She hopes to take noncredit classes in Berlin at Humboldt University in linguistics or research methodology. Her dual interests have led to a curiosity about the role of musical aptitude in language acquisition, something she might like to study in future.

Nelson knows firsthand and “second-hand” what it is like to be a student in another country.  When she was growing up, her family hosted several German exchange students who came to Wapakoneta through a sister-city exchange.

“I thought of them as my older, cool siblings,” she said. “Having them definitely influenced my ideas of what it would be like to live or study in a different country.”

That exposure also influenced her to choose German when in eighth grade it was time to pick a foreign language.

Her language skills improved further when, as a high school junior, she spent a semester in North Rhine-Westphalia living with the family of one of her family’s former exchange students. “I took an intensive ‘German as a Foreign Language’ class after school, and the family’s kids spoke English so they helped me, too,” she said.

“With that experience, I began a minor in German when I got to BGSU,” she said. She again took the opportunity to further her language skills by studying in Salzburg with the BGSU German program. That led to her being able to declare a full major in German, as well as music.

“Dr. Stephan Fritsch, who was the faculty supervisor that year, is a native Austrian,” she said. “He helped me arrange the internship in the ‘gymnasium.’

“He was one of the amazing mentors I had at BGSU,” she said. “He was so helpful in Salzburg and is a former Fulbright EU scholar. I also learned so much from Dr. Kristie Foell, who was my only German teacher at BGSU. She had also had Fulbright awards in the past. And Donna Dick (tutorial coordinator) in the Learning Commons was wonderful when I worked as a German tutor there.”

Nelson will join about 140 other Fulbright fellows at an orientation in Cologne, Germany, at the end of August before commencing her teaching assignment.

She is looking forward to life in Berlin and being able to walk or ride a bike anywhere or take the excellent public transportation, she said. Being stationed in Germany will also enable her to travel about Europe during school holidays.

The Fulbright Program is the flagship international educational exchange program sponsored by the U.S. government and is designed to increase mutual understanding between the people of the United States and those of other countries. The program operates in over 155 countries worldwide.