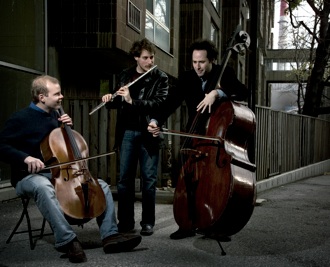 “Toledo’s classical music scene next week will focus intensely on youth music education — both performers designing programs to interest and inspire young audiences, and youthful performers revealing their capabilities in concerts and recitals.

If you’ve never thought of the flute, the cello, and the bass as percussion instruments, then you’ve clearly missed out on this young and energetic musical trio. Energetic young New Yorkers playing on classical-music oriented instruments are ready to free Northwest Ohio of such limited thinking.

The players — bassist Peter Seymour, cellist Eric Stephenson, and flutist Greg Patillo — who met while studying at the Cleveland Institute of Music, have applied a fresh new face and sound to the idea of chamber music through clever improvisation and fresh arrangements of standards.

“Absolute technical masters of their instruments — Patillo is renowned as the leading beatbox flutist in the United States, Stephenson is a regular in major chamber performances — they amp up the energy playing together, mixing styles from classical, jazz, urban, and original works with skill and wit.

Project Trio is coming to Bowling Green State University for a residency and to Toledo for several youth concerts Nov. 19-22. Their big marquee appearance will be at 8 p.m. Nov. 22 in Kobacker Hall. Tickets are $5-$15 at 419-372-8171. A preconcert talk for ticketholders will start at 7 p.m. in nearby Bryan Hall.” 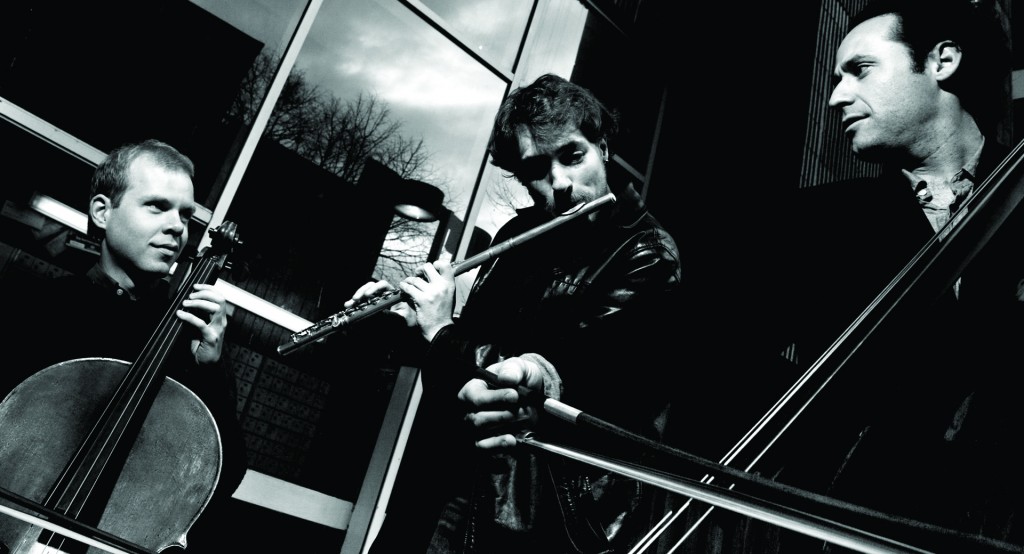 Festival Series audiences will have a chance to experience the virtuosity of world class artists who have the energy of rock stars, when Project Trio takes the stage at 8 p.m. Nov. 22 in Kobacker Hall at Bowling Green State University.

‪Project Trio consists of Peter Seymour on bass, Greg Pattillo on flute, and Eric Stephenson on cello. Together they are breaking down traditional ideas of chamber music. Blending their classical training with an eclectic taste in musical styles, they make a big impact on audiences of all ages. The genre-defying trio is acclaimed by the press as “packed with musicianship, joy and surprise” and “exciting a new generation of listeners about the joys of classical and jazz music.”

The program will include arrangements of music from Bach to Django Reinhardt to Jethro Tull, along with plenty of Project Trio originals. Selections include Mingus’ “Fables of Faubus,” J.S. Bach/Jethro Tull’s “Bourée,”  Beethoven’s 5th Symphony Jam, Prokofiev’s “Peter and the Wolf” … now set in Brooklyn, and originals encompassing everything from classical to jazz to rock to hip-hop to salsa.

The Wall Street Journal hailed the trio for their “wide appeal, subversive humor and first-rate playing.” The New York Times has called beatboxing flutist Pattillo “the best in the world at what he does.”

Seymour, Pattillo and Stephenson met at the Cleveland Institute of Music, where they discovered a collective desire to draw new and diverse audiences by performing high energy, top quality music. Using social media to broaden their reach beyond the concert stage and classroom, Project Trio has its own YouTube channel, which has over 80 million views and 96,000 subscribers, making it one of the most watched instrumental ensembles on the Internet.

Highlights of the trio’s 2014-15 season include engagements with the Detroit, Dallas, St. Louis, and Charleston symphonies, the Illinois Philharmonic, and season-opening concerts with the Evansville Philharmonic and WCF Symphony. This season, the group will participate in residencies at Mercyhurst College and Concordia College, as well as performing and leading master classes in schools, universities, festivals and other venues throughout the Germany, Italy and the U.S.

This past weekend, October 24-26, the Music Teachers National Association (MTNA) held their Ohio competition in Columbus.  BGSU students of Dr. Conor Nelson won prizes in both age categories for woodwinds, as well as second and third place in the “Senior Performance” category: