As its name suggests, the six compositions on trumpeter Charles Saenz’s new CD, “Eloquentia,” share a certain quality of eloquence. Recently released by Beauport Classical, the pieces for solo trumpet and piano “require the musician to understand the intention of each composer and their individual sense of the instrument,” said Saenz, an associate professor of trumpet at BGSU and coordinator of the brass/percussion area.

Although his solo performing repertoire is quite eclectic, Saenz said he has an affinity for these works, several of which are influenced by the Paris Conservatory style of writing, which places great value upon musicianship. The pieces he has chosen — by turns pensive, ebullient, sultry, even worshipful — show his ability with the trumpet’s expressive voice.

“The works on this CD are stunningly performed by a master soloist,” said George Novak, associate professor emeritus and a former colleague on the BGSU trumpet faculty.

“Charles Saenz is the consummate musician,” agreed James Ackley, professor of trumpet at the University of South Carolina, who was the associate producer of the CD. “He takes the time necessary to hone his craft, to delve into the world of the non-absolutes of music making, and comes out with a refined and exciting product every time. His new CD is like that. He takes a few pieces that are not performed often and crafts them into a fine display of music making and trumpet playing, intriguing to amateurs and professionals alike.”

Local audiences can hear Saenz in recital on Feb. 3 in Bryan Recital Hall at the Moore Musical Arts Center. The performance begins at 8 p.m. and is free.

Although “Eloquentia” is Saenz’s first solo CD, its six pieces are some that he and longtime collaborative pianist Solungga Liu, music performance studies, have played numerous times throughout the world, from Inner Mongolia to Europe to Brazil and all across the United States. They showcase Liu’s powerful playing and technique and the rapport they have developed together.

“Dr. Liu aptly performs along Charles to create a symbiotic sound palette of colors and nuances — something very difficult to achieve. Their music communication is at an extremely high level,” Ackley said.

Besides being Saenz’s first solo CD, “Eloquentia” represents several other “firsts”: “Variations” by Henri Challan and “Trois Mouvements” by André Waignein are recorded for the first time. “Concertino, Opus 41,” by Joseph Jongen, has previously only been recorded with trumpet and organ. All three were introduced to Saenz by Novak, and have become favorites of Saenz’s.

Another first is “Concerto for Trumpet” by Charles Chaynes, recorded for the first time with the composer’s piano reduction.

“This is something of a signature piece for me,” Saenz said. “It’s a pleasure for me to present my interpretation of this piece in that format. I hope it will serve as a good reference for others.”

He has been studying, performing and teaching the concerto for 20 years. “I grew up listening to the superb recording of it by Maurice André and much later became familiar with the recording by Eric Aubier upon its re-issue on compact disc,” he writes in the liner notes.

The recording opens with “Sonatina” by the Czech composer Bohuslav Martinů, a rousing work that Saenz feels is an homage to his national heritage, albeit it a challenging one for the musician.

“I find the final hymn-like statement to be one of the most difficult passages to perform both fluidly and with strength and character,” Saenz said.

The CD concludes with an “exclamation point” in the long glissando that caps off “In the Style of Albéniz,” by Rodion Shchedrin. The short piece begins energetically, soon to turn languid, almost jazz-inflected, with overtones of a Spanish dance, and then ending with a bold toss of the head.

In addition to teaching at BGSU, Saenz is a member of the Tower Brass Quintet, and appears on the group’s latest CD, “Road Trip,” released in May 2015. A frequent performer and recitalist, he has won awards and accolades for this playing, both here and abroad.

“Eloquentia” is available on CD Baby, iTunes and other websites as well as from Beauport Classical.

Another BGSU collaborator also contributed to the production of the CD. The striking photos on the jacket were taken by BGSU doctor of musical arts student Michiko Saiki.

Benjamin Bacni, a 2014 BGSU alumni and horn student of Andrew Pelletier, has won the First Prize in the 2015 International Horn Competition of America, University Division.  The IHCA is the only internationally-recognized solo competition for the horn in the United States, held every two years.  At the competition, Benjamin also won the Gretchen Snedeker Prize for his performance of Tim Martin’s “Lament for Horn Solo”. 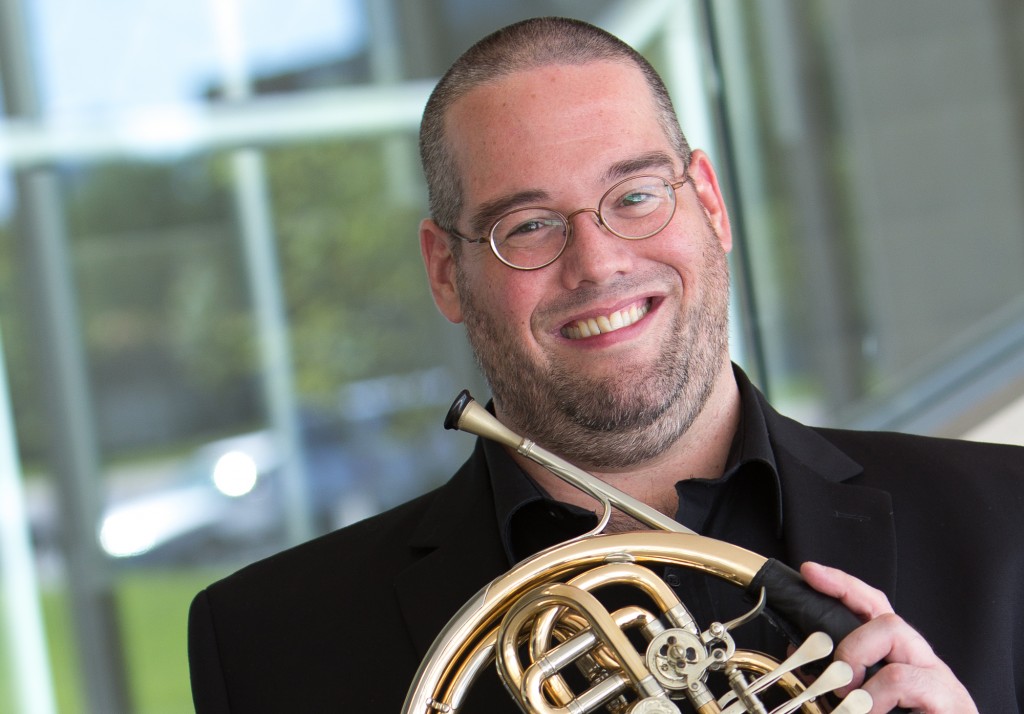