1968 was an explosive year.  In Chicago, the Democratic National Convention produced riots, police violence, and vehement protest against the Vietnam War.  Student unrest and demonstrations in the United States, Mexico, France, and elsewhere rocked political and educational establishments around the world.   A different type of explosion occurred that year in Costa Rica; one that would change the nation’s rural community culture, terrain, and environmental policy.  To commemorate the 50 year anniversary of the explosion of Volcan Arenal, last month my spouse, Dr. Lara Martin Lengel, and I visited La Fortuna, a popular destination in the Zona Norte region, and the gateway to Volcan Arenal, the site of the massive 1968 eruption and lava flow.  A steep trek up narrow, rocky paths to the top of the lava fields reveals a landscape changed by tons of lava, now cooled into extensive swathes of black, volcanic rock, interspersed here and there with lone orange or white orchids, and patches of ground covered in blue berries.  At some points along the lava trail, one also finds magnificent views of Lake Arenal, Costa Rica’s largest body of fresh water. 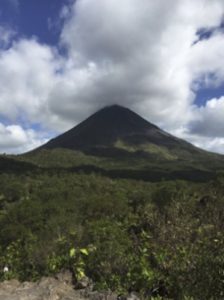 During our trip, we also visited Volcan Irazú, Costa Rica’s highest active volcano, which on a clear day offers the only view in the country of both the Caribbean and the Pacific; Playa Palo Seco, a barrier island on the Central Pacific coast that is home to a pristine beach and a mangrove swamp noted for its biodiversity; and the Museo de Artes Costarricense, a museum dedicated to Costa Rican painting and sculpture, housed in nation’s first international airport terminal in San Jose, the nation’s capital.

Our visit to Costa Rica served as a reconnaissance trip to complete planning for a study abroad trip for the 2020 J-term. The combined undergraduate/grad course, entitled “Cultural Studies in Costa Rica” (COMM 4060 Topics in Communication Studies / MC 5870 Workshop in Communication Studies cross-listed with HIST 4950 Workshop on Current Topics / HIST 5820 Problems in History) includes course meetings, virtual or face-to-face, before and after the fifteen-day field study program to Costa Rica.  The course will cover the history and culture of Costa Rica, with emphasis on Costa Rican political history, social and cultural development, and environmental policy.  Students will spend time in the Central Valley, Central Pacific, and Caribbean regions, as well as the cities of San Jose, Alajuela, Cartago, and Jaco.

Costa Rica attracts international interest for its natural beauty, biodiversity, and progressive politics.  The most stable democracy in Central America, Costa Rica abolished its army in 1948, committing the nation to peaceful coexistence with its neighbors.  Progressive legislation aims at promoting social equality, democratic government, and environmental protection.  Costa Rica’s rainforests, cloud forests, volcanoes, mangroves, mountains and coastal regions provide habitats for a wide range of flora and fauna, making Costa Rica one of the most biodiverse regions on the planet.    A visit to this fascinating country has much to offer tourists, students, and scholars.