In the courses I teach on local history, my main message is that every place has a history, 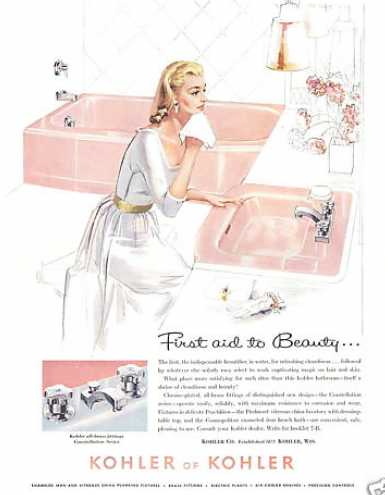 no matter how ordinary or how small. An abandoned storefront on a city block, a tumble-down farm house sitting in its lonely quarter acre, or your own home, has a history miles deep. If we’re willing to think creatively about the possibilities that small spaces hold, we can uncover intriguing stories about our communities that inspire and connect us.

I bought my house on Wallace Avenue in Bowling Green in 2006, just after my hire as an assistant professor of History. Built in the 1950s when post-war families needed housing fast, the small house has two bedrooms and a genuine “Mamie Eisenhower” pink-tiled bathroom (it’s a retro thing; you can Google it). A former owner added a second floor in 1970. When the realtor walked me through the house, I found the downstairs a little pokey and outdated, but the upstairs was one lovely, enormous room brightened by windows on all sides, a perfect sanctuary for thinking and writing.

After you buy a house in Bowling Green, people are eager to tell you all they know about its former owners, especially the gossipy bits. I welcomed these oral histories from older BG residents for the local color they lent to the facts I’d found in the courthouse and census. I learned that my home had once been owned by an ill-tempered woman who swore at her pet dogs so ferociously that she caused a neighborhood scandal. But the former owner who most intrigued me was Frederick (Fred) Eckman, an accomplished poet, critic, and local historian who served on the English faculty at BGSU from 1961 to 1980. He co-founded the university’s creative writing program with author Philip O’Connor in 1968.

For the first few years I lived in the home, my own scholarly writing took most of my attention, not to mention dealing with frequent flooding in the basement (we live in the Black Swamp, after all). But in the last few years I’ve taken time to discover more about Fred Eckman, thanks in large part to Dr. Phil Dickinson from BGSU’s English department and a current assistant dean in Arts & Sciences. Phil is working on a creative piece on Fred’s life, and has generously shared his research. Fred left a significant body of work, much of which he wrote in the Wallace Avenue house, and he was also known as a mentor to young writers who affectionately called him “Uncle Fred.” Tragically, he lost his only son, Tom, in the 1966 University of Texas “tower shooting,” one of the deadliest in US history. The young man died shielding his pregnant partner from bullets; she survived. Unimaginable grief comes through in Fred’s poetry after that date. Fred passed away in Texas in 1996.

In 1986, Fred co-authored a history of his hometown of Continental, Ohio, with his friend Jon Shafer. Before I knew much at all about Fred’s life, Jon contacted me out of the blue with questions about my local history course. When I met Jon for coffee, he presented me with a copy of the Continental history book, and there was Fred’s signature in it—funny how many threads connect to Fred.

Researching my own home led me to the work of a superlative poet and taught me more about the history of BGSU and, sadly, about the history of school shootings in our country. Now, it simply feels more meaningful to work on my scholarship at home, in the same space where Fred wrote his poetry. In 2018, Phil Dickinson and I invited a group of neighbors to a poetry reading at my home to honor Fred and his family. It was an enriching experience. The neighborhood calls my place “Fred’s house,” now. His work still brings people together.