BGSU History students, faculty, and alumni formed a lively presence at the Ohio Academy of History’s recent conference at the University of Dayton on March 23-24, 2018.  Their participation showed that History Falcons foster a valuable network within the state and help maintain the profession of teaching, researching, and writing History. 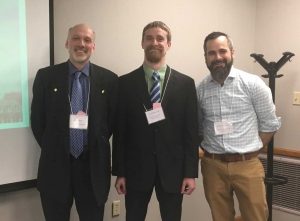 Rebekah A. S. Brown, a first-year History M.A. student at BGSU, presented her paper, “The Ohio Company, Medical Practice, and Westward Expansion, 1786-1794,” in a session on “Medicine, Society and Images of America in late 18th and early 19th Centuries.”  It is noteworthy that her work was accepted for presentation while she is still in her first year of our graduate program.

Don C. Eberle (BGSU Ph.D., 2013) presented his paper, “‘Our Airmen Were Hoping to Raid Cologne Every Night Week After Next’: Harry ‘Bud’ Fisher, an American Censor in the British Army during the First World War,” in a session on “The American Experience in the First World War.”  Dr. Eberle now teaches at Northwest State Community College in Archbold.

Chris Blubaugh (BGSU M.A., 2013) and Dustin McLochlin (BGSU Ph.D., 2014) presented papers in a panel on “19th Century Presidents: New Perspectives.”  Mr. Blubaugh, now teaching at Ohio Dominican University, presented a paper on “Protecting Lincoln: Abraham Lincoln’s Journey to the Nation’s Capital.”  Dr. McLochlin, now Curator at the Rutherford B. Hayes Presidential Library and Museums, presented a paper on “Complicated Narratives: Rutherford B. Hayes.”  Chair and commentator Dr. Kevin Kern (BGSU Ph.D., 1997) moderated a lively discussion among those who attended the session.  Dr. Kern is Associate Professor at the University of Akron, author of Ohio: A History of the Buckeye State (2013), co-founder and editor of the Northeast Ohio Journal of History, and Secretary-Treasurer of the Ohio Academy of History. 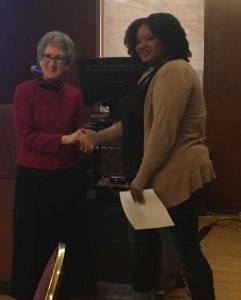 During the conference award ceremony, Dr. Ruth Herndon, Professor of History at BGSU and chair of the Ohio Academy’s Junior Faculty Research Grant Award Committee, presented the dual award to BGSU faculty colleague Dr. Nicole Jackson and to Dr. Tom Weyant, who teaches at the University of Akron.  Dr. Jackson’s award-winning book project is “Colonization in Reverse: Black British Family Activism in ‘Post’-Imperial England,” a study of Black British immigrants from the British Caribbean to London and other locales from the 1960s to the 1980s.

Also during the conference award ceremony, Dr. Dwayne Beggs (BGSU Ph.D, 2010) presented the Academy’s Teaching Award to Dr. Mitchell Lerner, Professor of History at Ohio State University.  This was most appropriate, as Dr. Beggs, now Assistant Professor at Lourdes University, himself won the outstanding graduate teaching award from the History Department in 2010.

BGSU History students, faculty, and alumni thoroughly enjoyed seeing each other at the Ohio Academy’s conference.  They renewed professional ties, exchanged news about their teaching and scholarship, and encouraged each other in their shared work of practicing history around the state.