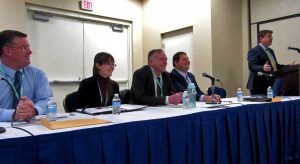 The BGSU History Department received some excellent recognition at a scholarly conference at the beginning of the year when alumni presented research at the highest profile gathering of historians in the country.

“The preparation process for our session was fairly meticulous, but it provided its own valuable networking opportunities,” said Lindsey Bauman. “Following all of the groundwork, actually presenting at the conference was its own kind of reward. The event presented us with a platform to reach a diverse group of professionals.”

The session was organized by Dr. Ruth Herndon and chaired by Dr. James Buss, Dean of the Honors College at Salisbury State University (Maryland) and another BGSU alumnus (M.A., 2002).  Dr. Kyle Ward, Social Studies Director at Minnesota State University, Mankato, who has written about high school history textbooks, became an honorary falcon for the weekend and joined the session as its commentator.

The study of textbooks is a vibrant field of historical study.  Textbooks evolve with society; textbook versions of history often conflict with each other as new generations interpret the past through different lenses.  Audience discussion and twitter posts about the session reflected this controversy over how historical knowledge is produced and then reproduced in textbooks.  Dr. Buss identified the session’s central question for historians: “How can (and should) we ask our students to undertake the difficult task of thinking like an historian?” The three papers, he said, “proffer suggestions for how we might think about teaching the past as we move into the future.”

The three papers showed how textbook history tends to legitimate the perspective of those with the most cultural and political power at the time of publication. “The presenters’ papers made me very happy because they went beyond the obvious,” said Dr. Ward.  “What I’ve found is that stories change, stories disappear, or stories remain intact. The accepted role of history education is to help create better citizens, and these stories reflect what kind of citizens students are expected to become.”

Mike Horton spoke for all three presenters when he pointed to “the conversations” generated by the session.  These conversations provided valuable feedback about new sources and research techniques; they also introduced the presenters to potential collaborators in future projects.

Mike Kneisel is currently in the History Ph.D. program at Kent State University; Mike Horton is in the Master’s Program in Underwater Archaeology at the University of Miami (Florida); Lindsey Bauman worked most recently as archivist and historical researcher at Whirlpool Corporation in Clyde, Ohio.