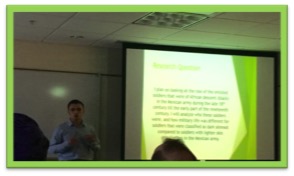 The 2016 BGSU Latino Issues Conference was held Thursday, March 24, 2016. It was an all-day conference that featured BGSU student presentations and a keynote luncheon with speaker Jennine Capo Crucet, award winner author of Make Your Home Among Strangers.

History undergraduates and graduate students presented their work in a panel entitled Music, Literature, and Criticism.” Matthew Wright presented on Afro-Mexican soldiers at the time of Mexican independence, discussing the importance of race and ethnicity at a critical juncture in time.

Kaysie Harrington and Josh Holloway spoke on the famous Catalina de Erauso and Thomas Hall whom both dressed and lived as the opposite sex for military and personal reasons. Harrington tackled the issue from the perspective of gendered honor norms, while Holloway discussed it from a broader political economic perspective, presenting Catalina as the foot soldier of an expanding global empire. Nanosh Lucas, a Dual History-Spanish MA student finally presented on food in nineteenth century Mexico and New England, seeing cookbooks were an integral part of an emerging capitalist culture of the time.

The Latino Issues/Encuentro Latinoamericano Conference illuminates on the diversity and successes of BGSU students and their ability to reach out to the community presenting history that would otherwise go untold.