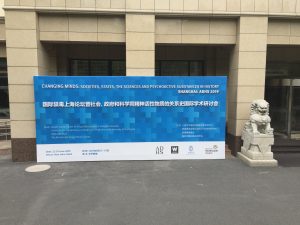 Last June, I visited Asia for the first time, traveling to Shanghai, China, to present a paper at the biennial Alcohol and Drugs History Conference, which was hosted by Shanghai University.  Shanghai hosted the 1909 International Opium Commission, which led to tougher restrictions on opium production and distribution in many nations, and was an important precursor of the first major U.S. legislative regulation of narcotics, the Harrison Narcotic Tax Act of 1914.  The conference went exceedingly well, due both the caliber of papers presented by a talented group of international scholars, and the warm hospitality of our colleagues at Shanghai University.  Papers and panels on the history of opium regulation, international drug markets, and Chinese approaches to suppressing illegal drug use provided new insights and stimulating conversation with historians from the Americas, Europe, Asia, and Australia.  Meeting and conversing with Chinese colleagues who taught and conducted research in a very different system of higher education than that of the United States highlighted both differences in academic cultures and similarities in the interests, concerns, and methods of historians on the both sides of the world.

While in Shanghai, I took the opportunity to explore the city, taking in some historical attractions and experiencing the city’s vibrant urban culture.  The Huangpu River runs through the city center, and on each bank, elaborate, coordinated light shows from Shanghai’s many historic and modern buildings give the area a striking appearance, both beautiful and modern.  By way of comparison, imagine Las Vegas, but tasteful and elegant.  I also visited three museums:  the Shanghai History/Shanghai Revolution Museum, with a special exhibit commemorating the 70th anniversary of the People’s Army driving Kuomintang forces from the city; the Shanghai Museum of Contemporary Art, with an excellent exhibition of graffiti and street art; and the Chinese Wu Shu museum, which chronicles China’s martial arts history.  All three offered valuable perspectives on Chinese society, culture, and politics.

By far, though, my favorite experience was visiting the People’s Park, a green oasis in the middle of Shanghai’s bustling center city.  The park offered a variety of leisure options, including walkways sheltered from the city’s skyscrapers by trees and huge bamboo plants, a beautiful pond with seating and viewpoints all around it, benches and tables where men played cards and talked, open spaces in which groups of middle-aged couples staged impromptu ballroom dancing, and a collection of carnival rides for children.  The park also harbored a large number of people sitting behind open umbrellas that lined the paths and walkways.  At first I had no idea of why they were there, but I learned that this was Shanghai’s marriage market.  Parents and grandparents of 20-something children sat on chairs behind the umbrellas, which had information sheets about their adult children and grandchildren.  They hoped to generate potential mates their young relatives in an urban, educational, and professional culture that complicated spontaneous socializing by men and women of marriageable age.  I learned a great deal at the academic conference, but considerably more about urban culture, approaches to leisure, and social customs in the People’s Park. 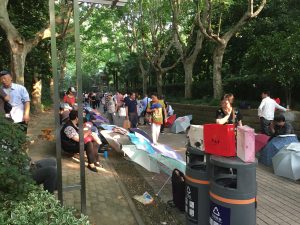 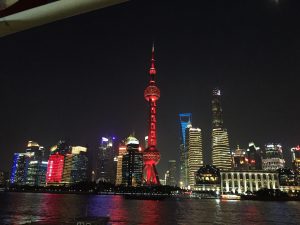