I recently had an opportunity to contribute to the “First on the Moon” series of events sponsored by Auglaize County Historical Societyand the Armstrong Air and Space Museum that commemorate this year’s 50thanniversary of the moon landing.  My discussion at St. Mary’s Community Public Library cautioned that our commemoration of the moon landing must firmly situate this episode in the tumultuous context of 1969.  Although the lunar landing garnered immediate international admiration and adulation, its benefits were frustratingly fleeting, as other events at home and abroad continued to diminish America’s international prestige and moral authority.

In popular memory, the July 1969 moon landing represents one of the nation’s greatest triumphs.  It symbolizes the apogee of American scientific and technological superiority and a Cold War triumph over the Soviet Union in the race to the moon.  Indeed, diplomatic cables from across the globe enthusiastically captured the tremendous international reaction to the mission to the moon.  In a message to the State Department, Ambassador Henry Tasca cabled “For a period of 8 days, Morocco held its collective breath…never in all my years in the service of the United States abroad have I witnessed an event with anything like the psychological effect of [the first lunar landing].” The Apollo 11mission “was a unifying experience,” captivating everyone in Rabat, from the “King and the street beggar,” to the young and old.  Perhaps overconfidently, Tasca believed that there was “no doubt that the international position of the United States in all its aspects has been deeply” and he hoped, “irreversibly changed.”[1] 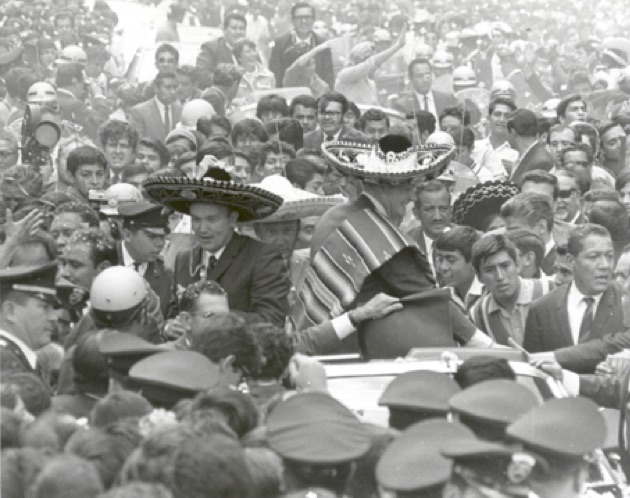 The Apollo 11 crew, billed as the “Conquistadors of the Moon,” in Mexico City on their Giant Step Goodwill Tour in 1969. Image courtesy of NASA.

American popular memory tends to emphasize how the moon landing raised America’s international prestige without fully recalling why Tasca and others believed the nation’s international position in 1969 needed to be “irreversibly changed.”  The year before the moon landing, America’s image abroad had suffered from its actions in Vietnam, the assassinations of Dr. Martin Luther King, Jr. and Robert Kennedy, racial strife, and the violent confrontations between protesters and police at the 1968 Democratic National Convention.  Domestic divisions and unrest continued into 1969 as the Stonewall riots that came to symbolize a new stage of LGBT activism occurred just weeks before the moon landing.

By the late 1960s and early 1970s advanced American science and technology had become associated not only with space exploration, but also with waging a high-tech war against pre-industrial peoples waging an insurgency in Vietnam.  Conventional bombings, the use of napalm, and Agent Orange demonstrated to many at home and abroad that the US was using its superior science and technology to wage an immoral war against peasants in Southeast Asia rather than advance the cause of global humanity as the space program emphasized.

My discussion then drew upon themes developed in HIST 6175: Cultural Diplomacy, my spring graduate course that examined how prominent American artists, athletes, musicians and others served as Cold War cultural ambassadors who sought to enhance the international image of the United States.  Shortly after the mission to the moon, “First Man” and Ohio native son Neil Armstrong, the other three Apollo 11 astronauts, and their wives also became Cold War ambassadors.  The Nixon Administration sent them across the globe on the “Giant Step-Apollo 11 Presidential Goodwill Tour” that took them to 24 countries and 27 cities in 38 days.

Participants of the Apollo 11 “goodwill tour” considered it a resounding success in countering this critique of America’s conduct in Vietnam.  Simon Bourgin, science policy adviser at the U.S. Information Agency (USIA) who accompanied the tour, remarked: “by their modesty, expertise, and warmth the astronauts projected an image of the kind of Americans other nations would like us to be.” (emphasis added).  A Czechoslovak broadcaster similarly reinforced this theme, identifying the goodwill astronauts as representing “the America we love, one so totally different from the American that fights in Vietnam.”

To Bourgin and others the moon landing was a diplomatic asset, presenting a desperately needed image of a peaceful nation abroad. Unfortunately, its benefits were short-lived, as revelations of the massacre at My Lai emerged later in 1969 and the Pentagon Papers demonstrated the depth of governmental deception on the war. Civil unrest, economic stagnation, and Watergate further tarnished the nation’s image abroad well into the 1970s. The Nixon Administration in 1969 would be disappointed that the moon landing and the goodwill tour provided just one small step forward for the nation’s image abroad, rather than the giant leap that the nation needed.

The anniversary events culminate in a ten-day festival from 12-21 July that includes the premier of the PBS-WBGU-TV documentary, First Steps: First on the Moon, the story of Neil Armstrong’s youth in Wapakoneta.