This entry, written by BGSU student Nicole Schwaben, is about a “Reacting to the Past” game led by Dr. Andrew Schocket in HIST 4220, America in the Revolutionary Era, Spring 2018. If interested, secure your spot in this Fall 2018’s reacting to the past (HIST 3910) course!

As Moderates, we tried our best to provide a fair and level-headed perspective of the issues at hand. However, this 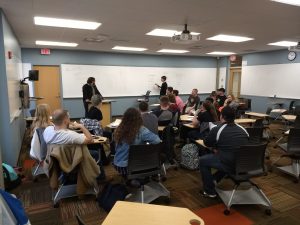 proved to be difficult at times. Many of the Moderates, myself included, were in debt; therefore, a member of the Loyalist faction somewhat controlled us. This was frustrating for the Moderate faction because we also desired to maintain autonomy. Without autonomy, we would not be able to make our own thoughtful decisions. Instead, we would be forced to put our personal beliefs aside and act as our creditors wanted, or face the consequences.

In my role, I was also the publisher of a newspaper that was distributed twice throughout the game. This gave me control of the media, including the ability to report on other events, cover what speeches and debates happened during the game sessions, and leave my own commentary on what actions I believed the Provincial Congress should take. The other factions seemed to notice the power that the newspaper held, and both sides attempted to use that to their advantage. At the beginning, the Loyalist faction nominated me to be speaker. I assumed I was nominated so that the member of the Loyalist faction, Frederick Phillipse, whom I was indebted to, could control my actions. Luckily, I was not chosen to be speaker. On the Patriot side, Judge Livingston also tried to gain control of the newspaper. Livingston offered to pay off my debts, as long as chose to vote in favor of the Committee of Inspection and write my newspaper in a way that benefited the Patriots. I refused to agree to these conditions, largely because I desired my newspaper to be relatively unbiased.

Unfortunately, there were consequences for not agreeing to the terms set by the Patriot faction. Because I refused, the Patriot faction mobbed me. The mob was an incredibly stressful situation in which I was not provided much time to make a decision, but had several options. I could attempt to form a counter mob; however, there was not enough people to accomplish that. I could shoot into the mob; however, that seemed risky and I did not want to promote violence. I could submit to the Patriot’s wishes, but then I would lose my autonomy. I could resist the mob, but then I would have been tarred and feathered and my newspaper would have been destroyed. I decided to flee to a British ship and miss the rest of the session, effectively ending the game for me.

Patriots, Loyalists, and Revolution allows students to immerse themselves into history. Students are encouraged to do their research on the American Revolutionary era, which enables them to play their character to the best of their ability and accomplish historically accurate objectives in the game. Through the speeches and debates during the game, students are able to empathize and gain a better understanding of those who actually faced these issues before the breakout of the American Revolutionary War.