Prior to coming back to school to begin the spring semester, I had the opportunity to travel to New Orleans, LA to attend the Phi Alpha Theta Biennial Convention. While at the convention I listened to a variety of undergraduate paper presentations from colleges and universities across the nation.

My paper focused on Lin-Manuel Miranda’s musical Hamilton. Throughout my paper, I argue that Hamilton is so popular because it is able to depict how the social and cultural issues, immigration, personal-political disputes, and political sex scandals that plague today’s society are the same issues that troubled society in the Revolutionary Era.

Since I was only in New Orleans for a short amount of time, I was not able to explore all of the city, but was able to visit the National WWII Museum, Bourbon Street, the Tulane Campus, and to look at the mansions on St. Charles Avenue. I was also able to sample some of the foods that NOLA is known for, such as Bananas Foster and Beignets. 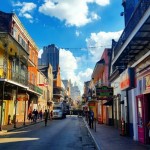 Needless to say, I had a wonderful time in New Orleans, although there was one minor issue that arose. When attending my first session, I was stunned to find that there was no use of PowerPoints or other technology used to present, which sent me into a small panic because I had prepared a PowerPoint presentation. Even though this was a setback, I was able to regroup and successfully present my paper. I was even able to receive valuable feedback from the moderator and my fellow presenting peers.

So, where do I go from here? This is not the end to my study on Alexander Hamilton. In the coming months, I plan to further research Hamilton by investigating how the same social and cultural issues discussed above are present in other eras of history. I will specifically be exploring the Jacksonian Era, as it is when formal immigration policy started to become present in American society- something I am keenly interested in studying. I hope to be able to present my findings at an additional conference by the end of my senior year.

Finally, I would like to thank the History Department and Dr. Ruth Herndon for supporting me throughout this process and making this trip possible.