We were not partaking in any jokes this past April 1st! Instead, several BGSU M.A. history students presented research papers at the annual Ohio Academy of History Conference. This year the conference was held at The Ohio State University. The conference began in the afternoon of March 31st. The first to present was Lizzy Hile in the panel on Health Care and Child Care in Ohio with her paper titled “The Spanish Influenza Epidemic of 1918: A Case Study in Bowling Green, Ohio”.  This day ended with a round table discussion on the College Credit Plus Program, moderated by Dr. Scott Martin.

The next day began bright and early with presentations starting at 9 a.m. On the panel for African American History beyond the Plantation Narrative, Chris Lause presented his research titled: “After the KKK: The Black Legion in Lima, Ohio”. Dr. Kara Barr also presented her research on the panel for Political Philosophy, Modern and Post Modern titled, “A Philosopher and a Thief: Intellectual Property and Radical Thought in Eighteenth-Century Paris.” Two BGSU students were on the panel for Business on Main Street America. Kaysie Harrington presented her research paper “’The Silver Dollar Man’: The Evolving Reputation of Toledo Defense Attorney Dan McCullough”. Alyssa Kapelka also presented on this panel, speaking on her research paper “These Wines Knew There Was a War On: How World War II Affected the Engels and Krudwig Winery”. Presentation continued all throughout the morning. Zack Burton presented his research project “Of Pizzas and Protests: BGSU in the Aftermath of the Kent State Shooting” on the panel for the 1960’s Generation Clash. On the panel for Migration, Nichole McCrory and Michael Horton presented their research “Haven or Hell? The Journey to America of Nine Hundred and Eighty-two European Refugees” and “A Competition of Efficiency: Mortality Rates among British Slave Ships 1712-1732”, respectively.

After lunch and the final acts of Dr. Martin as OAH president, one more panel of BGSU Students remained. This was a panel on the topic of NASA with Allison Nelson presenting her project “Intelligent Science: The Shifting Policies of Operation Paperclip”. Michael Horton returned for a second presentation with his paper “No Gold on the Moon: Generating and Maintaining Public Interest in Going to the Moon.”

Conferences offer wonderful opportunities for critique and practice for graduate students. This year, everyone showed off the depth of their knowledge and research. BGSU was well represented at the OAH conference of 2017, and are hopeful to do the same for conferences to follow. 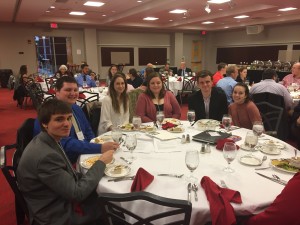