Dr. Beth Griech-Polelle’s audiobook, Europe’s Dark Journey: The Rise of Hitler and Nazi Germany, is available online through Amazon.com and other audiobook platforms.
“In Europe’s Dark Journey, Beth A. Griech-Polelle examines the factors that led to the ascendance of Adolf Hitler during the rebuilding of post-World War I Germany. Moving from the birth of modern Germany through the First World War, Griech-Polelle then focuses on Hitler’s early years and the creation of the National Socialist German Workers’ Party. Griech-Polelle illustrates how Hitler consolidated power—resulting in a society divided against itself and at war with a major portion of the world—and also maintains a special focus on the persecution of the Jewish population, both inside Nazi Germany and in conquered parts of Europe.” 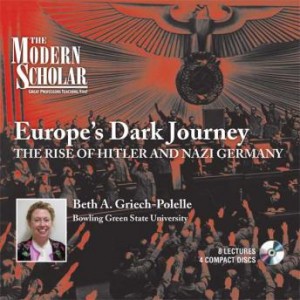