Winners in the competition from the studio of Myra Merritt included Autum Cochran-Jordan, Rebekah Wehrly, Desiree Johnson, Jennifer Cresswell and Elizabeth Hood.  Daniel Baumgartner is a student of Sean Cooper, Alphonsus Kiu is a student of Robert Satterlee, Amy Faber is a student of Tom Rosenkranz and piano students of Laura Melton who were winners were Peng Zhang, Chia-Jung Lin and Qincheng Zeng.

Judges for the competition included Robert Peavler, baritone, Associate Professor of Voice at Eastern Michigan University, Dr. Mary Beth Armes, voice and piano instructor at the Edinboro University Community Music School, and Laura Silverman, Coordinator of the Accompanying Department of the School of Music at the University of Akron.

A total of six prizes were awarded: two first prizes of $1,500 each, two second prizes of $1,000 each and two third prizes of $750 each. The Dr. Marjorie Conrad Art Song Fund encourages BGSU students to approach the art song in a serious and intense manner and enhance their learning experience by awarding financial prizes for singers and collaborative pianists.

Local physician and patron of the arts Dr. Marjorie Conrad endowed the Dr. Marjorie Conrad Art Song Competition. A native of Philadelphia, Conrad practiced medicine in Wilmington, Del., for nearly 20 years before moving to Bowling Green in 1966 to marry local physician Dr. Roger Peatee. She began her medical practice here the same year, becoming the community’s first woman on the boards of MidAm Bank and MidAm Inc., and, from 1987–89, served as the first woman chief of staff at Wood County Hospital. She retired from the active practice of medicine in 1991. Though she studied voice as a young woman, she began studying voice again in 1993.The College of Musical Arts mourns the loss of Dr. Marjorie Conrad who passed away on Wednesday, October 8, 2014.  She was 92. 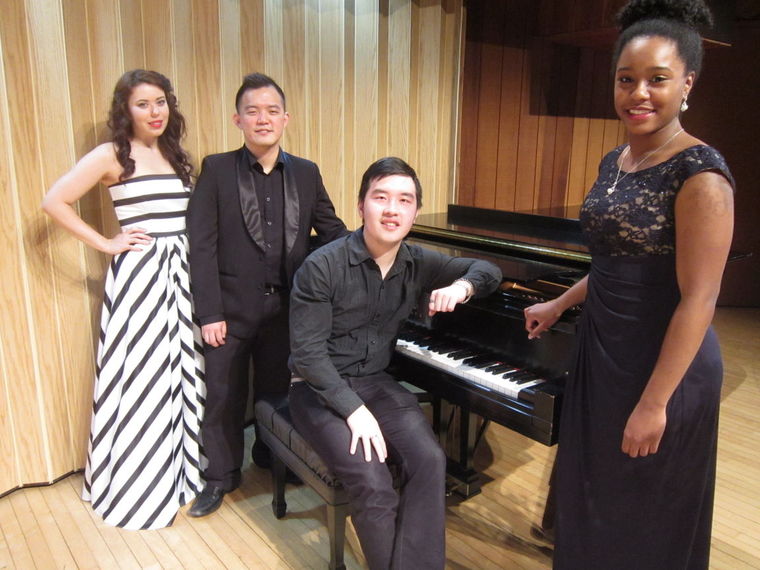 The Dr. Marjorie Conrad Art Song Competition at Bowling Green State University honors not just the singer out front, but the pianist who provides the instrumental support.

On Saturday College of Music crowned the 16th set of winning musical teams.

Both sopranos study with Myra Merritt, and both said the chance to study with Merritt was what brought them to BGSU.

Zeng studies with Laura Melton and Kiu, who plans to specialize in collaborating with vocalists in his doctoral program, studies with Robert Satterlee.

Both duos had an international flavor Johnson and Cochran-Jordan are both from Ohio and Zeng is from Chion and Kiu from Malaysia.

They were elected in the finals Saturday night. The first round was held earlier in the day with 17 undergraduates duos and nine graduate duos participating.

Other honorees in the graduate division were: soprano Jennifer Cresswell and pianist Chia-Jung Lin, and third place, soprano Elizabeth Hood and pianist Kiu.

The singers must perform songs from a variety of periods including one by a living composer and at least one each in  English, French, German and Italian.

This was the first competition since the death of its founder last October at the age of 92.

Conrad was remembered with a reserved seat and floral arrangement in the center front row of the Bryan Recital Hall.

Until last few years she would come to both the first and final rounds.

The winners of the competition will perform March 3 at 7:30 p.m. in the Manor House in the Wildwood Preserve Metropark in Toledo.