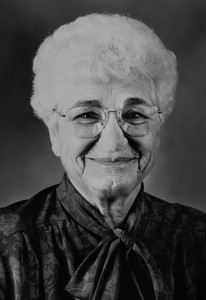 Service above self was the lifelong mantra of Dr. Ramona Cormier.

The former dean of Continuing Education and Summer Programs and associate provost at Bowling Green State University tirelessly put the University and Bowling Green community first and never sought praise or affirmation for her efforts.

Even after her death on Oct. 28 in Louisiana, the alternative energy crusader continued giving back to BGSU. Cormier made a $100,000 bequest to the University, which will benefit the Cormier Endowed Scholarship Fund. The scholarship fund was established for nontraditional students who have resumed classes after a break in their formal education.

Her final gift was symbolic of her lifetime of giving to BGSU and other organizations dear to her heart. Her philanthropy at BGSU extended to the Gish Film Theater, WBGU, Pro Musica, Library Enrichment, BGSU Opera, College of Musical Arts and many more.

Dr. Christopher Scholl, an associate professor in the College of Musical Arts and coordinator of voice/opera, said without generosity like Cormier’s the arts would cease to exist.

“Opera is the culmination of all art forms, music, theater, visual arts, dance and acting. It is very expensive to produce. Her generosity helped create productions that were visually and aesthetically pleasing,” Scholl said.

While always humble, Cormier leaves behind a legacy that has not gone unnoticed.

“Ramona Cormier touched the University and community in many, many ways,” said Wally and Diane Pretzer, former colleagues and long-time friends. “She was always willing to step up.”

Cormier came to BGSU in 1965 and remained until her retirement in 1990. She began as a faculty member in the Philosophy Department, but worked her way up the University ranks before she retired as dean of Continuing Education and Summer Programs.

During her tenure, she held numerous posts and belonged to a host of professional organizations, garnering a multitude of awards along the way. One of her greatest contributions to the philosophy realm was her development of research tools as associate director of the Philosophy Documentation Center. She composed many publications and was well-known as a high-caliber scholar. She later served as president of the BGSU Retirees Association.

Suzanane Crawford, who succeeded Cormier following her retirement as dean of Continuing Education and Summer Programs, called Cormier a “forward-thinker” with high standards and a relentless pursuit to advance the department and University.

“We called her the ‘orphan dean’ because she took on projects other deans didn’t want. This benefited our program, but also the institution and our students,” Crawford said.

“She left behind a sense of community, of positivity and a sense of forward-thinking that sometimes gets lost,” Crawford said.

Forward-thinking seems an appropriate way to describe Cormier who was a staunch supporter of alternative energy in an era where such ideas were almost unthinkable.

Cormier served the community in several capacities, including her time as a member of the Bowling Green Board of Public Utilities. She was an integral player in promoting wind and hydroelectric energy, solar power panels at the BGSU Ice Arena, load management and Green Power. She served four years as board chair.

She was strong in her convictions and didn’t shy away from giving her opinion, but she was also known as a good listener.

Outside of academia, Cormier served in the U.S. Navy shortly after graduating from college in 1943. She retired in 1946 as a first class ensign.

Cormier was also known for being a master gardener, world traveler, excellent cook, wine connoisseur and avid Shakespeare fan. She was a native speaker of Cajun French and immersed herself in French culture.