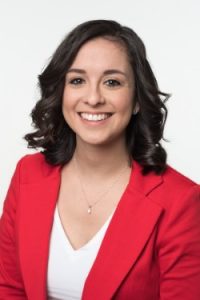 Nearly 1,575 miles separate Bowling Green State University and Weslaco, Texas, the hometown of 2015 graduate Sarah Sanchez. Sanchez said she took a chance on the university not letting the distance deter her, and once campus, she made the most of her chances that came her way. Now, those chances are playing out in ways she hadn’t imagined.

As an undergraduate, Sanchez helped with BGonTV, a student organization that creates content that is broadcast on WBGU-TV, the campus PBS affiliate-station. This allowed for her to host her own show that taught her shooting and editing during her freshman year. By her senior year she became vice president of the organization and took a part-time job at WBGU.

“I knew journalism is the way I wanted to go,” Sanchez said. “It is fun to meet people, hear their story, see their passion and to tell that story.”

Sanchez said a professor that really pushed her to work toward her goals was Kelly Taylor. Taylor invited Sanchez to join a seven-member team of BGSU students covering the Ohio Newspaper Association annual convention in 2015.

Taylor said Sanchez was the consummate professional during the weeklong project.

“Being a student journalist covering a professional journalism event is tougher than covering something for class or student media,” Taylor said.  “The professionals attending the event care about journalism being done right so the stakes are higher.  Sarah represented BGSU very well.”

Taylor further described Sanchez as a confident and personable young woman. “She was always upbeat and approachable, important traits for a then budding journalist. These are also the same qualities that no doubt serve her well in her current job.

Post-graduation, Sanchez found herself in a front desk secretary position with Buckeye Cable Sports Network, as a way to break into the television industry.

After several months in that position, upper level management decided to put her in front of the camera. Her first spot was a live shot, covering a playoff round game for the Toledo Walleye. 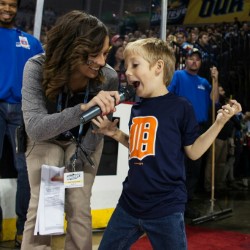 Following the success of her first on-camera spot, Jeff Young, the live events manager, decided to keep her in front of the camera, but for the company’s arts network, BCAN.

Young included Sanchez on a trip to Washington, D.C., to work on a story at the Veteran’s Memorial. “While she was there we could see how far she had come from that first live shot,” Young said.  “Sarah has a passion for storytelling and you can see her passion for feel good stories.”

Sanchez also holds the in-game hosting position for the Toledo Walleye and MudHens.

While Sanchez liked her work for the Buckeye Sports Network she felt there was another position out there somewhere that would allow her to help out more in the community.

That position presented itself and in January Sanchez took a job as a communication specialist  at the Ohio Council of Community Schools. Sanchez role is to set up partnerships with organizations to help provide in their charter schools with unique opportunities.

One of the programs is a hockey-themed reading curriculum that partners with the Toledo Walleye, connecting her two worlds. Children get to meet the players and learn how to play hockey.

“BGSU prepared me how to interact with every contact I made. It gave me the confidence to ask for an interview. You do not get what you do not ask for,” Sanchez said. “My job now is building relationships and building those communication skills. I learned things that I never thought I would have to use. I was in TV, but now I am writing press releases.”

While Sanchez did not know what to expect when making the journey from Weslaco, Texas, she has learned it was worth the distance.