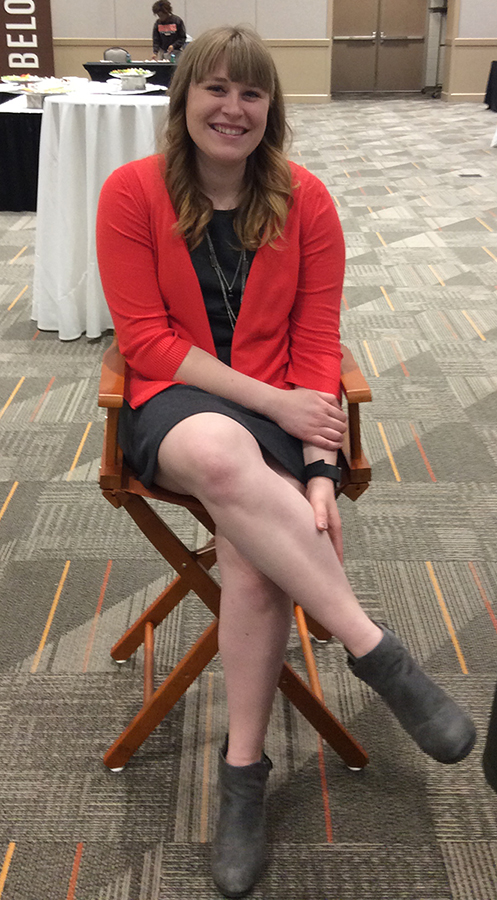 Senior Holly Shively tries out the director chair she received during the Beyond BG event that recognized 10 outstanding seniors.

Starting as a BG News reporter, Shively moved through the ranks working as social media editor, city editor, then editor-in-chief. She also worked one semester as editor of Key magazine. This year she managed all of Falcon Media while also hosting a weekly news radio show and organizing content production for the weekly submission to the The Blade’s NewsSlide app.

Shively, who maintained a 4.0 grade point average, completed internships at the Columbus Dispatch and The Findlay Courier, held officer positions in SPJ and won  Touchstone awards from the Toledo Press Club. During the journalism and public relations spring awards she was inducted into the Kappa Tau Alpha journalism honor society and won the Waugh Award, which is the most prestigious award given by the department.

This year marked the 29th awarding of the university’s Top 10 Outstanding Senior Award.  The award was created by Bill Ficken ’63, who spoke at the awards reception and with his wife has been part of the committee that interviews the top 10 awardees.

The student-administered award begins with a campus-wide call for nominations from faculty and administrators. This year yielded 110 nominations.

Nominees are then asked to apply for the award. From there, the committee combs through the applications narrowing the list to the top 10, who then go through an interview.

The top 10 awardees are invited to a small reception at the Mileti Alumni Center where they speak briefly about their time at BGSU. Following the reception, the group moves to Olscamp Hall for Beyond BG, an event open to all graduating seniors. At the event, the No. 1 Outstanding Senior is announced and all awardees receive a director’s chair commemorating their achievement.

Michael Caniglia, a political science major with an economics minor, was selected No. 1.

This entry was posted in Student Achievements, Students and tagged Holly Shively. Bookmark the permalink.