Bowling Green State University played host to the NFL’s 12th annual Broadcast Boot Camp from April 9-11. There were 35 participants from the NFL, including 14 current players, who took part in a program that focused on show preparation, radio production and field reporting. 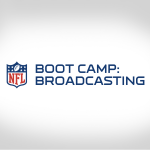 Until this year, the broadcast boot camp had been held at NFL Films in New Jersey. BGSU, which had hosted the Sports Media NFL Boot Camp for the past five years, was well suited to step in and host… continue reading