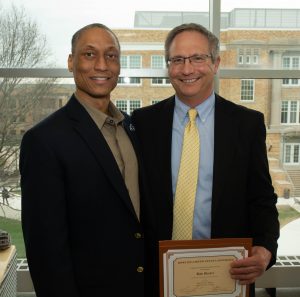 Jared Wadley and Bob Bortel. Wadley, a member of the BG News Alumni Society board, introduced Bortel at the awards ceremony.

Bortel, a 1977 BGSU journalism graduate who began working for The BG News as a student reporter, summer editor and production manager, has overseen the campus newspaper operation full time since 1982.

Since 2015, he has supervised operations of BG Falcon Media, the unified student media organization that, besides The BG News, includes WBGU-FM; BG 24 TV News; Bowling Green Radio Sports; Key Magazine; and The Obsidian, the multicultural newspaper.

Under Bortel’s leadership, The BG News was named the nation’s best college paper by the Society of Professional Journalists in 1988-89 and is a seven-time winner of the best paper award in SPJ’s Region IV. In 2000-01, The BG News was one of only seven newspapers nationally and 15 internationally to receive the Society of News Design’s Gold Ribbon Award for best redesigned paper.

The newspaper’s website, bgnews.com, received recognition in 2012 and 2013 as one of the top collegiate websites in the nation by the Associated Collegiate Press. “The foundation for my career as a newsroom leader was built at The BG News, and the person who set the example, then and now, is Bob Bortel,” said fellow Journalism Hall of Famer Mizell Stewart III, senior news executive at the USA Today Network. “He is a committed journalist, a creative and transformational business executive and a supportive, inspiring leader.”

Bortel is a 1973 graduate of Liberty Center (Ohio) High School and a former resident of Napoleon, Ohio. He currently lives in the rural Liberty Center area. BGSU’s Journalism Hall of Fame award began in 1979.