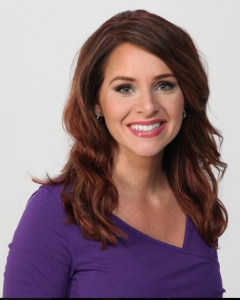 Award-winning journalist and  WTOL news anchor Kristi Leigh solidifies her position as the face of broadcast in Toledo.

Leigh is one of the few people to work at all four local news stations in the Toledo area. She got her start in broadcast with internships at Toledo CW, and WLIO, a station in Lima, Ohio.

Leigh was doing her last internship at WLIO when she got the opportunity to produce news content for the first time. Leigh said the news director didn’t let interns contribute to the content but she secretly produced news packages anyway.

“I had to be very ambitious,” Leigh said. “It was the third weekend I was down there that I just told the producer, I’m going to do a package for you today. She was like ‘okay’, and I just kind of did it under his nose.”

Following graduation, Leigh landed her first job in the Toledo market as a reporter for Fox 36. Leigh said she was motivated to get a job because she was married and got pregnant with her first child during her senior year of college.

“I just thought that if I didn’t get started that it was going to be that pipe dream that happens for most people,” Leigh said.

Leigh said working for so many stations in the Toledo area was something that happened “not by design.”

When Leigh was reporting for Fox 36, the station was bought out by WTOL Channel 11 which resulted in a large cut of employees. Leigh was cut because she was working part time.

In search of another reporting job, Leigh sought out more news stations in the area.

“I reached out personally to Channel 24 and Channel 13 at the time,” she said. “Channel 24 didn’t even respond at that time and Channel 13 was like ‘sure, come in for an interview,’ so I started working part time for Channel 13.”

When Leigh was ready to return to full-time work, Channel 13 wasn’t hiring but Channel 24 was looking to expand.

Channel 24 offered Leigh a full-time position as a news anchor and a reporter that she just couldn’t turn down.

After almost a year and a half in, Leigh was laid off. She received interest and interviews from larger cities in a bigger market, which drew the attention of Channel 11 producers.

“Ultimately, it was where God wanted me to be,” Leigh said. “It was very clear: like, how did this top job open up just as I had lost my job? So, I felt like I couldn’t ignore that.”

Leigh said from the time she was a child she knew she had a knack for journalism.

“It started as something where my parents would call me a little reporter because I would ask so many questions,” she said.

At BGSU, Leigh dedicated her time first to the BG News then BG 24 as a reporter, producer, and anchor.

“I started with The BG News and my best experience is when I did an opinion column,” she said. “I was pretty bold in my opinions so that was fun getting to share my opinions and really spark conversation.”

Initially, Leigh started out as a print major but soon moved to broadcast.

“It was actually a bit of a struggle,” Leigh said. “I don’t know that I would recommend someone starting in print and moving to broadcasting. It seems like it would be a good idea, but in the end, you have to break yourself from all the habits of writing for print.”

As a senior, Leigh won the Outstanding Broadcast Student Award given by the department.

Professor Jim Foust described Leigh as very determined and driven. “She sort of always had her eye on the prize,” he said. “She always had a star quality to her.”