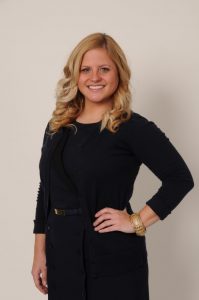 Everyday alumna Megan Justice walks into the house of the third President of the United States to start her job.

In 2016, Justice became the Director of Events at the Thomas Jefferson Foundation, a position Justice considers her dream job.

Terry Renter, a journalism and public relations professor, said the job fits Justice. “That fits her personality and her talents,” she said.

Justice and her team plan different events like weddings, socials and corporate retreats. They also plan all internal foundation events.

“It’s very fulfilling to see the logistics my team has coordinated come together,” Justice said. “There are a lot of moving parts, including holding actual court on the lawn. Most importantly, we naturalize around 75 new citizens each year during the ceremony.”

Before Justice got her dream job at the Thomas Jefferson Foundation she worked as an intern in Washington D.C.

“When I graduated college in 2009, the economy was terrible and there weren’t a lot of jobs in journalism or public relations,” Justice said. “I heard about an unpaid event planning internship at Capitol Services in Washington, D.C., and figured, why not?”

After the unpaid internship, Justice moved into a sales position at Gaylord National Resort, a convention center located in National Harbor, Maryland.  Justice said she never thought that she would get a job in sales, but it ended up helping with the hospitality component of event planning.

“It certainly wasn’t what I thought I’d do after college as it wasn’t directly related to my degree, but that internship and job really drove home my love for the hospitality industry and event planning,” she said.

When Justice started school at BGSU she didn’t know she wanted to focus in Public Relations until she had a class taught by Rentner.

“Dr. Rentner was one of my absolute favorite professors,” Justice said. “After taking one of her classes, I realized my passion was actually in Public Relations not in print journalism and I changed the focus of my major.”

Renter described Justice as “high energy.”  Rentner has visited Justice recently. “I went to Washington, D.C., and visited her and she is very talented and engaged in her career,” Renter said.

Justice said it’s important for students to get involved with student media and take advantage of experiences college provides students.

“Not only did BGSU prepare me with a college degree, they also provided me with the professional skills needed to succeed,” she said. “One of the main reasons I was able to get an internship was the real-life experience I gained in the classroom.”

As for what is coming up in Justice’s dream job. She is currently planning on an event where the foundation is planning on opening Sally Heming’s Room and the rest of the South Wing at Monticello, Thomas Jefferson’s House.

“[The event] signals the end of the restoration that’s been happening for the last few years. This will happen over a celebratory three days and include a large public event on the West Lawn,” Justice said.

Justice is excited to invite people to the West Lawn at house of the third president of the United States.