Imagine your entire career becomes the story for a book.  That is the case for Tom Dawson, ’66. Well, sort of.  Dawson is the author of “Building Blocks,” which chronicles the history of Buckeye CableSystem in Toledo, a place where he had a decades-long career. 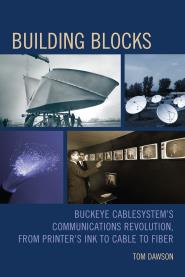 In 2012 Allan Block, chairman of Block Communications, Inc., asked Dawson if he would be interested in writing a book on the history of Buckeye CableSystem, which would celebrate its 50th year in business in 2015.

“My biggest challenge after boldly saying I would do it was wondering if, indeed, I really could do it,” Dawson said.

“The next challenge was getting my arms around 50 years of history,” Dawson said. “Very little was written down and few of those who were involved in the early years were still around to talk to.”

Dawson said the book began to come together as sources became available and new information in one area lent itself to something he was writing in another area.

Dawson sought out University Press of America, in Lanham, Maryland, to publish what would be a 232-page book.

“The next thing I received from them was a contract accepting the book at their entire publication and marketing cost and a royalty to be paid on all sales,” he said.

University Press of America treated “Building Blocks” as a business textbook and according to Dawson it helped his ego that a professional publishing house felt his book was worth taking a chance on.

Getting some of his first experiences as a journalist at the Dayton Daily News as a high school student, he became a writer and photo editor for the BGNews when he came to college.

During his sophomore year, Dawson took his first full-time job working as a reporter for the Findlay Courier.

“I have worked every day since, weekends and vacations notwithstanding,” Dawson said.

Dawson’s strong work ethic continued to open doors for him.

The Blade became the next stop in his writing career, and in 1986, he moved to the cable side of the company.

“When I got into news I just wanted to have the most impact for the most amount of people,” he said.

He continued to work at the company for over 25 years, retiring in 2009 from full-time work, but signing back on as a consultant.

Bob Bortel, director of student media, has known Dawson for over 30 years.

“He was well into his career and I was just starting out,” Bortel said. “He was someone who I respected and looked up to. He had a certain level of expertise that makes you think ‘oh I want to be like that guy.’”

Bortel admires Dawson passion toward serving BGSU. “He was passionate about connecting, serving and giving back to Bowling Green,” Bortel said.

Bortel said Dawson always took opportunities when they were presented to him. “He saw an opportunity [with “Building Blocks”], and it may have been out of his comfort zone, but he took it,” Bortel said.

Bortel said Dawson’s decision to write the book was an act of discipline. “Good writing can’t be undersold,” he said.

Now retired, Dawson continues to work as a freelance writer.

He hopes to undertake a coast-to-coast motorcycle trip and invest in flying lessons, but more importantly, he said, he hopes to say “I had fun” at the end of his career.

To receive a 30% discount, use Dawson_book_order form.

This entry was posted in Alumni, Alumni Achievements. Bookmark the permalink.
Skip to toolbar