German broadcaster shares his perspective on the refugee crisis in Europe

German broadcast journalist Christian Schlegel gave a presentation about “Refugee crisis in Europe with a focus on the situation in Germany” to journalism students on the afternoon of April 5. 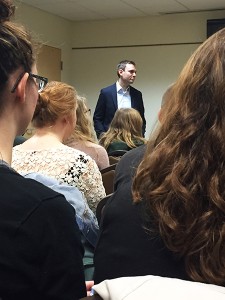 German broadcast journalist Christian Schlegel is introduced to students before his talk on the refugee crisis in Europe. Photo by Jessica Snyder.

He briefly reviewed the development of the story before answering questions.

Students from Advanced Broadcast News, Public Affairs Reporting, and Visual Editing had a wide range of questions for the RIAS Commission fellow.

Students, faculty, and community members were interested in the ways in which German citizens were responding to the rapid introduction of one-million people. Schlegel said most Germans wanted to help the refugees and the government was working to provide housing, however, 10 to 20 percent of the people objected to taking in the refugees.

Schlegel works as an editor and producer for the TV station Phoenix in Bonn. It’s a news- and documentary channel run by the two main public German TV channels, ARD and ZDF.

He is a duty editor responsible for covering news and live events. The focus is on national and international news and political events.

He also works as a duty editor for the political talk show “Phoenix Runde” at the same TV station. The show is aired three times a week in the evening.

Additionally, he has worked as a radio presenter for radio stations.

He earned his doctorate in political science and has published articles in several professional journals.

Schlegel spent a week in Washington, D.C., before coming to Toledo and Bowling Green. He will spend the rest of the week at WTOL-TV in Toledo and next week in New York City.

This entry was posted in Events, Guest Speakers, Kathy Bradshaw. Bookmark the permalink.