John Grieshop has taken pictures at some of the biggest sporting events in the world.

Working for well-known companies such as Sports Illustrated, Getty Images, Major League Baseball and baseball card company Upper Deck, Grieshop, ’90, has photographed events like the Olympics, the World Series, the NBA Finals and the NHL Finals. 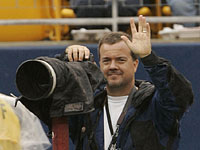 Grieshop started his career by studying photojournalism under the late James “Jim” Gordon.

“John was always one of Jim’s favorite students,” Bob Bortel, director of student media, said. Bortel advised Grieshop during his days working with the BG News in the late 80s and early 90s. “He was very involved with us, had a good eye and was very responsible,” Bortel said.

After getting his photojournalism degree, Grieshop made the decision to move to New York City to work as a lighting and traveling assistant at Sports Illustrated. It was a difficult move for him he said because he “didn’t know a soul” in New York City, but the prestige of SI made it an easy decision. With Sports Illustrated he traveled to many events and learned from Walter Iooss and some of the best sports photographers in the world.

“The opportunity to learn from the best in the business it really allowed me to get where I am now,” Grieshop said.

When thinking back to his time at BGSU the one thing he truly misses is Myles’ pizza. He told a story about a time when he and his office mates at Sports Illustrated argued over which city or place had the best pizza. Grieshop told them that Myles had the best pizza he’s ever tasted, and to prove it to them he ordered Myles’ pizza all the way from New York City. The pizza was delivered in a Fedex truck and when it arrived he said he felt like “the hero of the office,” and his co-workers agreed that Myles’ Pizza really is the best.

After five years honing his skills and gaining experience, Grieshop moved on from Sports Illustrated.

Grieshop moved to his hometown in Dayton and took jobs traveling the Midwest taking pictures for the MLB, baseball card company Upper Deck and occasionally for Sports Illustrated.

Grieshop said he really enjoyed that period of his life because he loves to travel. “I enjoyed the work so much it didn’t feel like work,” Grieshop said.

His favorite time to shoot pictures for was spring training for baseball. He said he thoroughly enjoyed the greater access to the players and the “ability to take really creative pictures.”

Grieshop’s favorite shot was one he took at the 2015 Home Run Derby in Cincinnati. Reds player and fan favorite Todd Frazier was competing. Grieshop said he “timed his picture perfectly” with a remote-controlled camera placed between the pitcher’s mound and the batter’s box.

After more than 15 years travelling for work, Grieshop took a government job because it allowed him to spend time off the road and with family. “The skills I developed in a private sector transitioned well to the public sector,” he said.

He still takes pictures of big events for the MLB and Getty images but in a smaller more manageable role.