From a photojournalism major to the chief of marketing and communications officer, David Kielmeyer, 1988, discusses just how he transitioned to such an important role at the university. 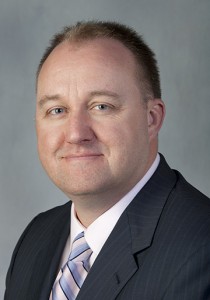 “When I was a student I don’t think I ever imagined that I would be involved with the university 28 years later, in this role,” Kielmeyer said.

Kielmeyer, a Marion, Ohio, native, began his college career at the university in 1984. He worked at BG News as a photographer, and for one summer as the managing editor. He was also editor of the Key yearbook his senior year.

After graduating he worked as a photographer for the Sentinel Tribune for three years. Missing the writing portion of journalism, Kielmeyer returned to the university to earn his master’s degree in mass communications.

“A challenge for me was going to be convincing folks that a photographer could write,” Kielmeyer said.

Writing lead to jobs in public relations in Toledo and then back to the university.

The chief of marketing and communications officer is responsible for the advertising and marketing for the university. “The nice thing about my job and PR and marketing in general is that there’s a lot of variety,” Kielmeyer said. The position can range from speaking with the media on behalf of the university, discussing strategies for advertising or making decisions for the campus public television station, WBGU-TV.

Because BGSU is a large university allocation of resources always comes into play when communicating among the various constituent groups, and he said, “can always be a challenge.”

Kielmeyer and his team assist with retention efforts through communications and helping to attract new students to the university all while being cognizant of the impact their decisions will have on students.

Facing resource issues isn’t the only challenge Kielmeyer encounters. “We’re a fairly large organization so things come up and its trying to keep up with the day to day and still manage the occasional challenge or crises,” Kielmeyer said.

The public relations aspect of this position includes crisis communication. “A crisis can be anything from a weather cancellation to a student death,” Kielmeyer said. Then there are some day to day challenges that can be described as a crisis that simply require the need to communicate quickly and effectively.

Robert Bortel, director of student media, said: “I think its an advantage. I like having a guy who came from our side of the fence working in that position because sometimes chief information officers and student media operations cannot see eye to eye and bump heads.”

Kielmeyer spoke highly of the people from the journalism department who helped him along the way including, Jim Gordon, Jim Bissland and Bortel.

Bortel served as Kielmeyer’s adviser while he worked on the yearbook. “He’s an easy person to work with, very responsible and a good sense of humor,” Bortel said. “He was always well liked because he was easy going, available and down to earth.”

Bonnie Blankinship, manager of internal communications, has worked with Kielmeyer for about eight years. Though he took on this new position, Blankinship said, “He’s still exactly the same.” She added that being the chief has given him an even broader perspective now that he is continually dealing with upper administration and needs to have more awareness of everything that happens on campus.

“His skill at evaluating things and using his judgement has maybe gotten deeper,” she said. She said even as the boss Kielmeyer continues to create a positive working environment for his staff.  “He’s always been great about not blaming us if we make a mistake,” she said.

Kielmeyer said, “I don’t think that’s where I envisioned myself being but its worked out very well and I enjoy it.”

This entry was posted in Alumni, Alumni Achievements and tagged Dave Kielmeyer. Bookmark the permalink.
Skip to toolbar