Thanks to involvement in student media in college and the opportunity to work in the professional world simultaneously, 1998 alumnus and Emmy-award winning journalist Jeff Cook gained much success after graduation.

The moment Cook stepped foot on campus freshman year he joined several student activities. He got involved in musical theatre but developed a love for journalism after joining BG24 News.

“It’s a great organization and it’s a great way to learn about broadcasting,” Cook said. “I think it’s what makes BG one of the best schools for broadcast journalism in the country.”

Cook served BG24 News in many roles, trying everything from prompter to anchor. He even served one semester as the weathercaster. 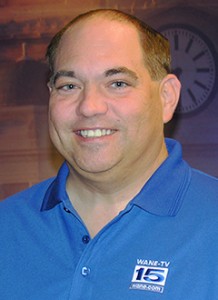 Former BG24 News faculty adviser Jim Foust said at a time when the broadcast news organization was still new, it was this group of students that attributed to its success.

“He was among my first group of students,” Foust said. “Jeff was always an energetic person. He really always cared about journalism and about the news, and he’s always been aggressive in that way where he wants the organization to cover the news in the best possible way it can.”

During his freshman year Cook also began working at Channel 13, an ABC affiliate in Toledo, first as a floor director and live truck driver, then a producer during his sophomore year.

Cook worked at WTVG-13 for the rest of his college career, simultaneously taking on the roles of a student and a professional journalist. He was there during the station’s format change to 13 ABC Action News.

“He was one of the people that was trying to bring the things Channel 13 was doing to our newscast,” Foust said.

Cook said he had to sacrifice many typical college experiences, but the professional experience he gained made it worthwhile.

After graduating, Cook continued at Channel 13 then jumped to multiple stages across Ohio. This included WLIO in Lima, NBC24 in Toledo, WTOL in Toledo, and WOIO in Cleveland. He eventually landed at WANE-TV in Fort Wayne, Indiana, where he is today.

Cook won an Emmy Award for his work as a producer at WTOL and was nominated for an Emmy at WOIO. For Cook, this meant he achieved a lifelong goal.

Cook said it was his time in Cleveland where he gained one of the best experiences in his career.  Working in Cleveland showed him the fast-paced market that comes with living in a bigger city.

Moving to a smaller area like Fort Wayne with less competition meant having to adapt to a different audience and market.

Cook said learning to adjust his expectations to the people he works with at a station has been pivotal to his success in journalism.

This entry was posted in Alumni, Alumni Achievements and tagged BG 24 News, Jeff Cook. Bookmark the permalink.
Skip to toolbar