A contingent of five BG News editors and advisers participated in hands-on workshops and interactive lectures on where college student media might be headed.

The group attended “The Future of College Student Media,” a two-day summit hosted by the College Media Institute at Vanderbilt in late February. The summit featured a multimedia training workshop for students and multiple sessions discussing innovations and change in campus media geared at collegiate advisers. 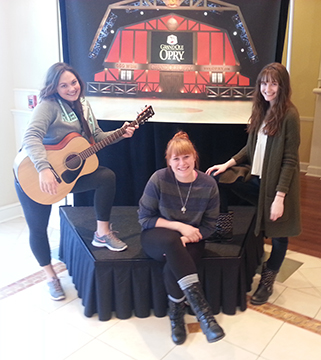 Michele Mathis, Holly Shively and Samantha Sharp pose in the lobby of the hotel in Nashville. The three BG News editors attended a multimedia workshop at Vanderbilt Feb. 24-25. Photo by Bob Bortel.

Prior to attending the workshop, Samantha Sharp, a first year student and Pulse Editor at the BG News, had limited experience with multimedia packages having shot only one video segment. “When they gave me a tripod and a camera and let me loose on the street I was terrified!” Sharp said. “However, the instructor of the workshop, Jim Hayes, told us that nothing is ever perfect in video, and that ‘good’ video is what everyone should shoot for.”

After the workshop, Sharp said: “This trip has given me a good starting ground for incorporating more video pieces with print based interviews. I immediately started thinking of different ways I could start weaving videos into the entertainment section.”

Holly Shively, a sophomore multiplatform major and City Editor at the BG News, said the workshop was extremely valuable. “In the fast paced and quickly changing world of journalism, I can’t put a price on having these multimedia skills,” she said.

After returning from the trip, Shively talked with BG News Editor-in-chief Annie Furia about different ways The BG News could use multimedia components, specifically video, to enhance the content. “I will now be taking the role of head of multimedia, assigning projects to our multimedia intern and completing some multimedia myself,” she said.

Michele Mathis, managing editor at the BG News also attended along with Bob Bortel, director of student media, and Kelly Taylor, chair of the Student Media Advisory Board.