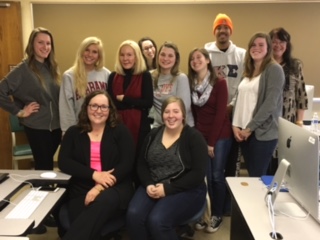 Pulitzer Prize winner Katherine Boo talked about reporting and finding ways and using technology to cope with your weaknesses when she visited the public affairs reporting class on Feb. 23.

For example, she knew from the beginning that she was shy and did not like small talk or chatting up bureaucrats, and so she learned to ask for and use public documents extensively in her work, in addition to interviewing.

Because she has problems with her hands she uses video, still photos and audio recordings when interviewing, and by doing so, she discovered she can include more details.

Boo and the Washington Post won the 2000 Pulitzer Prize for public service for investigating abuses in the public housing group homes provided to people with mental disabilities in Washington, D.C. She also won the 2004 National Magazine Award for Feature Writing for her article “The Marriage Cure” in The New Yorker.

She has been a staff writer for The New Yorker since 2003 and was a reporter and editor for the Washington Post.

Boo was on campus as part of the Common Experience, which used her book “Behind the Beautiful Forevers” as the Common Read. This book won her a 2012 National Book Award for Nonfiction.