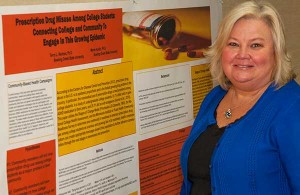 Terry Rentner’s stands next to the poster that was presented at the Society for Public Health Education conference in Baltimore.

Terry Rentner received a faculty improvement leave for the 2013-2014 academic year following a five-year term as the School of Media and Communication director and a four-year term as the Department of Journalism and Public Relations chair.

She spent the year on three college student health grants conducting research, designing and implementing programs and evaluating the impact on changes in awareness, attitudes and behaviors among BGSU students.  Her work centered on high-risk drinking, suicide prevention and the misuse of prescription drugs, all serious health concerns among college students.

High-Risk Drinking Campaign
Two of the most difficult challenges college campuses have in reducing high-risk drinking is in changing the campus culture and mandating alcohol education policies. This three-year $514,500 grant, awarded by Ohio Department of Alcohol & Other Drug Addiction Services, aims to correct misperceptions about college drinking.  The theory is that changing misperceptions will lead to behavioral changes.

The Wellness Connection website has more information on this alcohol education program at BGSU.

Suicide Prevention Campaign
Rentner and her grant partners Faith Yingling, director of the Wellness Connection, and Garrett Gilmer, director of the Counseling Center, launched a campus-wide campaign titled “Start the Conversation” that trains students, faculty and staff on how to talk to someone who is in distress.

This was year two of a three year $306,000 grant awarded by the Department of Health and Human Services Substance Abuse and Mental Health Services Administration. The goal of the grant is to empower the BGSU community to create a culture of care for suicide prevention.

The program began with a student-produced video contest and a public relations campaigns capstone course that created the “Start the Conversation” campaign.

The BGSU Humanities Troupe offered an alternative to lectures through the use of interactive vignettes and discussions performed throughout the year.

Twitter contests and Messages of Care engaged students in thinking about how to create a culture of care on this campus.

Rentner also created a faculty learning community on helping students in distress that meets every other week this academic year.

Prescription Drug Misuse Campaign
The most recent grant was awarded this past summer by the Cardinal Health Foundation. This is a one-year $10,000 grant to educate the BGSU community about the misuse of prescription drugs.

Among college students, the nonmedical use of pain relievers in the past year by 18-25 year olds in Ohio exceeds the national average by 3.06 percent (SEOW 2010).  The ACHA-NCHA survey conducted on this campus in fall 2012 showed that the actual misuse of prescription drugs among BGSU student in the past 30 days was 29.6 percent. Results indicated that 10 percent of students are using painkillers not prescribed for them during the past 12 month.

The Generation Rx campaign, launched this October, focuses on increasing awareness and knowledge about prescription drug misuse.  Similar to the other two campaigns, this one is also a student-centered, community based approach to creating a healthier BGSU environment. This campaign will primarily utilize social media to engage students in learning activities.

Rentner also used her leave to present her research, findings and programming on her grants at four conferences including the Society for Public Health Education annual meeting held in Baltimore, Maryland, and Health Communication Division of the National Communication Association held in Washington, D.C. In addition, she had a book chapter published in February and another to be released later this fall.

This entry was posted in Faculty, Faculty Achievements and tagged Terry Rentner. Bookmark the permalink.