Professor finds peace during summer trip to workshop in Israel 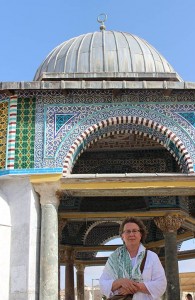 Associate professor Catherine Cassara makes time to take in the sites during her July trip to Israel.

The Department of State warns visitors to Israel that they should know the location of the nearest bomb shelter. But Catherine Cassara found unexpectedly peaceful areas during her trip to Israel.

In July, the associate professor in journalism at Bowling Green State University attended a workshop in northern Israel about the politics of the Israeli and Palestinian conflict. The workshop included trips to various sites around Israel—during a time of greatly increased rocket attacks from Gaza toward Israel.

Cassara was able to visit the Golan Heights, which has carried a violent association for her since it was a battleground in the 1973 Yom Kippur War. The Golan Heights she visited this summer was much different.

Cassara described how peaceful it was with its flowers, trees, fields, honeybees and a scenic overlook at a rest stop.

“It’s like being in a state park,” she said. “What the hell is going on here? The Golan Heights?”

In case anyone needed a reminder that the Golan Heights hadn’t always been state park-like, one area had a bunker and silhouettes of soldiers with guns.

“I didn’t go down in the bunker,” Cassara said. “Fat people with bad knees shouldn’t go into bunker places. It’s just not a good concept.”

Other than the fake war set-up, “it was nothing connected to what you would’ve expected,” she said. “It was the strangest, strangest thing.”

Cassara also visited the Dome of the Rock, a site in Jerusalem’s Old City that carries significance for both Muslims and Jews. She found it peaceful as well, despite people holed up in the nearby Al-Aqsa Mosque throwing firecrackers out.

“In spite of the fact that it was really kind of traumatic to be up there while [the firecrackers and shouting] were going on, it was fascinating. … It was peaceful. It was incredibly peaceful, even though you had all these firecrackers and the police arresting them and them all yelling, ‘God is great!’ … The place has just such peace. Big trees, shade, and just this sense of one of those places where people have been praying forever,” Cassara said.

But the reality is that peaceful places are rare in Israel.

“[The] situation in Israel is never good,” said Itay Gabay, assistant professor in the Department of Journalism and Public Relations at BGSU.

Gabay moved from Israel to the U.S. in 2007. All of his family and most of his friends still live in Israel. Some live near the Gaza Strip and left their homes this past summer to avoid the rockets that could have landed on them.

Gabay worried about them more this summer, as the rockets now travel further from the Gaza Strip. Safety is not guaranteed anywhere. Gabay pointed out that Israel is a small country, close in size to New Jersey.

Though Cassara found peaceful areas, she doesn’t expect the conflict to be resolved any time soon. There are many obstacles to overcome, one obstacle being that politicians won’t acknowledge all the obstacles.

Cassara was surprised by a workshop session in which one former Israeli settlement leader acknowledged poor treatment of Palestinians.

“We may never get to reconciliation,” he said, “but we could treat the Palestinians humanely.”

This could include taking down the wall and building better living spaces in refugee camps, he said.

“It was incredible,” Cassara said. “He was admitting to all the things the Palestinians feel.”

By the end of her trip, Cassara had decided that she wanted to return. She would love to go back to today’s peaceful Golan Heights, she said. Though she finds it unlikely, she would like to return to an Israel in which peace can be found in more places.