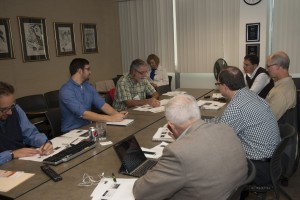 Dr. Jim Foust, professor in the Department of Journalism and Public Relations, conducted a day-long video training workshop for a group of newspaper journalists. The workshop, organized by the Ohio Newspaper Association (ONA), was held in West Hall on October 23.

Six journalists from newspapers around the state attended the workshop, which consisted of a morning discussion of technical and aesthetic principles of video and an afternoon of hands-on training with Adobe Premiere Pro editing software. Over the lunch hour, participants went out on campus in pairs with video cameras provided by the School of Media and Communication to practice what they had learned.

Foust, who has taught at BGSU since 1994, has a professional background in corporate video and television news videography and editing. He welcomed the chance to share his expertise with other journalists. “I enjoy doing these kinds of training sessions for people in the industry,” he says. “It’s great to see people wanting to learn new tools that they can use to be better journalists.”

“If this seminar is given again, I’d recommend it with enthusiasm,” says Dave Dix, one of the participants in the workshop. “It was excellent. . . . [Foust] organized the day well, had good hand-outs, and devoted two thirds of of the six-hour session to practical hands on.” Dix is publisher of  Kent, Ohio’s, Record Publishing Company, publisher of 14 newspapers, including the daily Record-Courier. 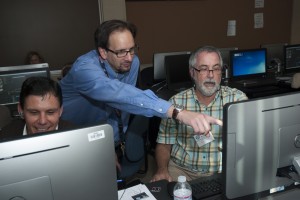 The ONA, which represents daily and weekly newspapers in the state of Ohio, conducts a variety of training sessions throughout the year. Foust has been a member of the group’s professional development committee, which organizes training, since 2008. “Foust has done training previously for ONA and has been supportive of the training needs of our members,” says Sue Bazzoli, ONA manager of administrative services. “The committee felt that video and video editing would be a good training topic to offer our members and Jim was a great choice as instructor.”

“I think it went well,” says Foust. “Everyone seemed to enjoy it, and they seemed to all be learning something.”

This entry was posted in Faculty, Faculty Achievements. Bookmark the permalink.
Skip to toolbar