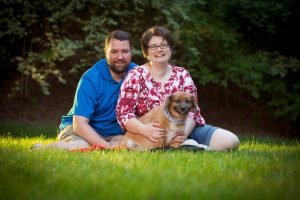 2005 graduate Kara Lopp with her husband, Jason, and their rescue dog, Bella

Kara Lopp, class of 2005, has come a long way since her days as a Falcon. From changing careers and moving states, a lot has gone on in the last 13 years. Lopp now spends her days working for a non-profit outside Charlotte, North Carolina, and loves every second of it.

Although she loved reporting, Lopp said the switch to a nonprofit organization was a no-brainer for her. “I’ve always loved nonprofits and doing volunteer work,” she said. “I wanted to be able to use my skills to benefit a cause.”

Lopp’s switch to communications came as a surprise to some of those who knew her during her time at BGSU. Kelly Taylor, journalism professor and one of Lopp’s mentors, was taken back when she found out Lopp left the news world. “I was a little surprised that she switched from journalism to communications because she was such a good reporter and always worked in the newspaper business,” Taylor said. “I am not surprised she is doing nonprofit work, though. She is a very generous and caring person. She is easy to talk to, a trait which also made her a good reporter.”

Lopp started out her freshman year at the university by joining the BG News staff as a reporter and stayed with the program until she graduated. By her sophomore year Lopp was the editor of the community section and by junior year editor in chief.

Before her senior year, Lopp acquired an internship with Journal Gazette in Fort Wayne, Indiana.

After she graduated she worked at the Journal Gazette for about a year and a half as a general assignment reporter and then from there did some reporting for the Auburn bureau office. It was right around this time that Lopp got married and her husband got a new job, relocating them to North Carolina.

In 2007 Lopp got a job at the Charlotte Observer bureau office and reported there for a year before becoming a freelance reporter and then editor of the local newspaper called Matthews-Mint Hill Weekly. She stayed there for about five years before changing her career from journalism to communications.

Even though Lopp is enjoying her nonprofit work, she says she will always miss working in news. “Nothing beats the comradery of a news room,” Lopp said. “As a reporter and an editor it was amazing to go out and interact with and meet new people. There’s just a special kind of energy that comes with the job and the people.”

Looking back on her time at BGSU, Lopp said she loved her experiences and feels that her professors helped prepare her for the real world. “I made life-long friends in college, including some of my professors,” Lopp said. “Bob Bortel and Kelly Taylor were such good mentors to me every step of the way.”

Bortel and Taylor, who are both still at BGSU, have stayed in-touch with Lopp over the years. “Kara was one of those rare students that combined good journalistic skills with the personality to also be a good editor,” Bortel said. “She had great skills, but also great humility about herself, meaning she was very coachable to becoming a better writer and listened to advice. She never took it personally.”