Alumnus credits BG News for making him a better journalist 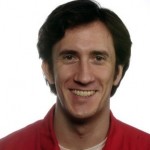 Moser did not dream of becoming a journalist growing up.  In fact, he almost became a sports management major instead.

“I kind of just flipped a coin and it landed on journalism.  I chose that knowing I could change it later freshman year if I wanted to,” he said.

Moser decided to stick with journalism about midway through his first year, when he became interested in a series of stories by the Toledo Blade called “Tiger Force.”  The Pulitzer Prize-winning series detailed the atrocities of an elite US army platoon during the Vietnam War.

“I thought it was an example of how reporters could solve decades-old mysteries and crimes and make a difference,” he said.

“He was just a hard worker.  Sometimes I wondered if he slept,” she said.

Moser said he learned the most from working at the BG News.  He was editor-in-chief of the paper his senior year.

“At the BG News, I made some mistakes, but I had a lot of good breakthrough moments and made a lot of friends.  That’s where I got the experience of writing good stories and having kids in class recognize them,” he said.

Brendlinger remembered Moser as a good editor, who spent most of his time working on the paper.

“He was very committed to the BG News, and when he was the editor, he worked really hard with the younger students.  He tried really hard to be a good mentor,” she said.

After college, Moser’s first job was a working as business reporter in Lafayette, Louisiana.  In 2007, he won the World Affairs Journalism Fellowship by the International Center for Journalists, a nonprofit based in Washington, D.C.

With the fellowship, Moser went to Brazil for two weeks to write a 14-story series on sugarcane ethanol, which later won an Associated Press Media Editors Award.

“Before those two weeks ended, I decided I was going to move there,” Moser said.

Moser met his future wife while writing the story, and he moved to São Paulo, Brazil, in 2008.  He worked as a business reporter for several US and British news outlets.

He moved back to the United States in March 2015, settling in Orlando, Florida.  Since Florida is the closest state to Brazil, it has a large population of Brazilian tourists and residents.  Thus, Moser’s ability to speak Portuguese is more valuable there.  It also makes visiting Brazil a lot easier.

In Orlando, Moser works at GrowthSpotter, a new business news product from the Orlando Sentinel Media Group.  It focuses on early-stage property acquisition and development in the Orlando area.

“I put puzzles together every day.  The level at which we write stories is, we write them at such an early stage that the buyers, the sellers, they don’t want the news public, usually.  We don’t work off press releases.  Everything we do is exclusive,” Moser said.

His competitive nature helps in his job, because he has to be the first one to report the news, or it is no longer exclusive.

“He’s really dedicated to his job.  He really thinks what he’s doing is very important and he is still quite competitive in that sense.  He really works hard to be the first person to get that news out,” Brendlinger said.

BGSU senior Hannah Benson went with Brendlinger to Orlando for the Society of Professional Journalists Excellence in Journalism Conference in September 2015.

One night, they had a dinner with Moser.  Benson described him as soft-spoken and intelligent.

“He was very quiet, but if you asked him a question, he had no problem talking about it,” she said.

Benson said se she was feeling a bit discouraged at the conference, but seeing Moser’s passion for his job helped ease her worry about finding a job after graduating.

“Just talking with him and seeing that if you put in the effort and are willing to strive for your passion, it will go somewhere.  It might take a while, but something will come of it.  It just requires hard work thinking outside the box,” she said.

Similarly, Moser’s advice for BGSU journalism students is to work hard and often.

“Whatever you want to do in journalism, there’s a couple 100,000 kids the same age in the same classes across the country that want the same thing,” he said. “You need to separate yourself from the pack, and the only way to do that is to not just turn off your Xbox One or PS4, but to get it out of your life and go live at the BG News or live at BG24.”

This entry was posted in Alumni, Involvement. Bookmark the permalink.
Skip to toolbar