With the sequence change from print to multiplatform, the department had been looking for someone who could help take the program to the next level.  They have found that with new faculty member Saif Shahin.

“One of the things we were really looking for in the position was someone who knew the new technology, knew how to do it, and had actually used the new technology while they were reporters,” retired journalism professor Nancy Brendlinger said. Brendlinger chaired the search committee that hired Shahin.

Shahin, who is currently teaching multimedia reporting and online journalism, is settling into to the position. “The faculty is great,” Shain said. “Everyone has been very helpful.”

Students are also enjoying having Shahin in the classroom. “He’s very personable and makes sure every single student understands the content he’s teaching before he moves on,” sophomore journalism major Melissa Noel said. “He’s very helpful if I have to ask him a question outside of class or during office hours, which is great because I don’t have much experience with technology.” 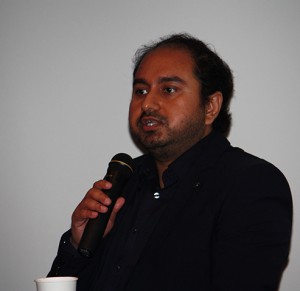 Serving as one of four panelists on the Toledo Press Club’s forum on fake news, new assistant professor Saif Shahin shares a his perspective on how journalists might establish their credibility. The forum was held on Feb. 25 at the Toledo Public Library.

Shahin said he plans to help journalism and public relations students increase their online presence in order to make themselves more marketable. “A lot of research shows journalists who have created a brand for themselves online are being preferred,” Shahin said.

Shahin’s journalism education started in India, where he earned a bachelor’s in journalism at the University of Delhi. He then traveled to the United Kingdom for his master’s. Currently, he is finishing his doctorate at The University of Texas-Austin while teaching here.

“In Omen and Qatar I wrote in English on regional politics,” he said. “In England, I had two internships with BBC and had some of my stories got published online.”

Shahin was competing with incredible talent, but he was a top candidate the whole time, Brendlinger said. Shahin had both research in technology and professional experience in the industry.

“He had the modern tools,” Brendlinger said.  “He had them all and he taught them. He had excellent teaching evaluations at Texas.”

Shahin liked that at BGSU the department is housed within the School of Media and Communication. They are two separate entities at the University of Texas-Austin. He said he was also impressed with the converging media and digitalization of its individual parts.

Due to the strong pool of candidates, Shahin went through a series of interviews before being offered the job. “It was a very long process,” he said.

Moving to a new country to study and teach is not without its challenges. “I miss my family a lot,” Shahin said.  “We stay in touch on the phone or Skype and that makes it easier. But, it’s obviously not the same thing.”

Being the new guy in Bowling Green has also left him missing his friends in Austin. “I used to live in graduate housing and it was fun to be around close friends, hanging out with them, ”  Shahin said.  “Austin also has a vibrant cultural life, a great live music scene and some excellent restaurants serving international cuisine – especially Indian. I enjoyed all of it and giving it up has been a big adjustment,”

Coming up on the end of his first year, Shahin said he beginning to make friends within the department. He said his favorite place in Bowling Green is the Kuhlin Center, the new home of the School of Media and Communication as of fall 2016. He said he has become friends with faculty and student and that is where they all are at.

This entry was posted in Faculty and tagged Saif Shahin. Bookmark the permalink.
Skip to toolbar