Broadcast alum is the face of Northwest Ohio sports 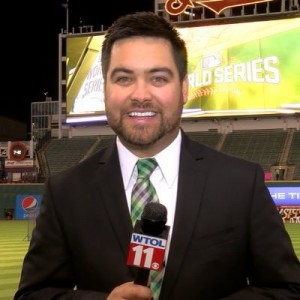 From doing play-by-play in the stands at the Toledo Sports Arena during his youth, to being sports anchor for WTOL Toledo News 11, Jordan Strack has always had one dream: to be on television.

“Ever since third grade, all I wanted to do was be on television,” Strack said.

Sports was always a priority in the Strack house, especially hockey. Whether it was waking up before the sun rose for practice and games or playing in the living room with his younger brothers, Logan and Riley, hockey was always there.

“Looking back, we never had a ton of money as a family and hockey was expensive,” Strack said. “My parents worked their hardest and did whatever it took to make us happy.”

Strack was never the best athlete, so playing sports after high school wasn’t in the cards for him. He chose a career path where he knew he would excel. That path led him to study broadcast journalism.

He chose BGSU not only for the great journalism program, but for its proximity to home.

The Falcon alum said, “BGSU was far enough from home for me to have my college experience, but still be close enough to visit regularly.”

During his time at BGSU, Strack worked at Buckeye Cable Sports Network in Toledo. He worked the cameras, did replays and contributed anyway he could. That changed when his boss, Greg Franke, gave the then 20-year-old Strack a shot to cover an indoor soccer game.

“I was nervous and my suit was too big,” Strack said. “But, moments like those helped me get to where I am today.”

One faculty member who helped Strack was Kathy Bradshaw. “I looked at him and called him Shrek,” she recalled of one of their first encounters. This created a laughter among the two of them and the rest of the diversity class that day.

“She helped me so much,” Strack said.“She is so smart and she always knew what she was talking about.”

Nine years out of college, he stays connected with Bradshaw and regularly returns to campus to speak with her classes.

In 2008, he graduated with a bachelor’s degree in journalism. Strack started at WTOL News 11 Toledo immediately after his graduation as the weekend sports anchor.

“I love the people and environment here,” he said. “There aren’t days where I don’t enjoy going to work. The best part about it is that I get to talk about sports for a living. Its cliché but it is so true.”

“He’s a lot of fun,” Cummins said. “Over the years we’ve become great friends. I love having him in the newsroom, we joke around and have a lot of laughs. But, when it’s go time, he’s the best there is to work with and is very efficient getting stories done.”

Among Strack’s career highlights are the two World Series, the 2014 Ohio State National Championship in Dallas, the Stanley Cup Final, and the yearly coverage of the Ohio State vs. Michigan game.

His greatest memory, though, was the opportunity to interview legendary Detroit Tigers broadcaster Ernie Harwell.

“Ernie Harwell was the reason I got into broadcast,” Strack said. “When I was young and the Tigers had day games, I would turn on the radio, go into the backyard and play baseball while listening to him cover the game.”

Among his many feature stories one that stands out was his story on Brent Darah, the first transgendered athlete in Bowling Green State University history.

“Getting to know Brent and learning the intricacies of what he went through was incredible and eye-opening.”

When Strack isn’t on the television delivering the daily sports, he spends his time doing “dad stuff,” like picking up his daughter from kindergarten or taking her to dance class.

“She is the best thing that has ever happened to me,” he said. I am always busy and trying to keep up, but I wouldn’t trade it for the world.”

This entry was posted in Alumni and tagged Jordan Strack, Kathy Bradshaw. Bookmark the permalink.
Skip to toolbar