“In PR, you don’t know what to expect, every day is something different,” said Detroit Red Wings Public Relations Coordinator Kyle Kujawa to 30 PRSSA students from BGSU as part of a networking experience.

The venue of the meeting was unlike any other. BGSU PRSSA (Public Relations Student Society of America) members sat in the Joe Louis arena bleachers as the junior league hockey team, “The Little Caesars” took the ice for practice. Students met with a variety of staff members such as Foundation Coordinator Kelsey Rentner, a BGSU Journalism and Public Relations alum and director of the Red Wings Foundation, Josh Sanborn and Public Relations Coordinator Kyle Kujawa. These professional individuals gave students advice about the career industry from their own perspectives.

Students were curious about what a normal day on the job was like in the PR industry. 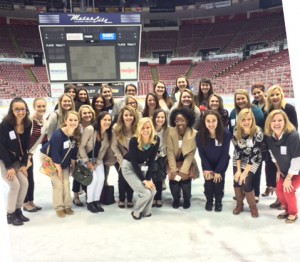 Kujawa told students that he works on at least one press release a day, maybe more depending on what is going on at the time. He advises that students should prepare for the unexpected. In addition, Rentner adds that it is not the typical “9 a.m. to 5 p.m. job.” She mentions that planning and executing events can cause late nights and additional work on the weekend.

PRSSA members also had questions relating to internships and how to be noticed when applying for a position.

Sanborn stated, “When hiring for a new member on my team, I receive numerous amounts of applications. Everyone is fighting for that one spot.”

Sanborn explained to students that being personable, having network connections and internship experience can set one candidate apart from another. Kujawa related to his personal experience of having multiple internships in college. He described that his internships gave him the ability to learn and grow in his skills as well as having exposure to new tasks in the process.

Also, students had the concern of how to keep a balance between work and a social life.

Sanborn told students that it all comes down to “priorities.” Sanborn balances not only his work schedule, but his family and furthering his education for another degree.

The final question of interest for the members was about finding the perfect dream career.

Rentner said, “No matter what the experience, open your door to other options that are out there.”

Sanborn explained to students that a dream career isn’t necessarily easy to find. He emphasized the importance of learning from other jobs along the way will help lead to the ideal career.

PRSSA members not only spoke with the staff members, but also went on a tour of the Joe Louis Arena. Students had the opportunity to see different aspects of the arena such as the press box, private club suites, the Manhattan room and even the Red Wings locker room. Students were able to acknowledge the Red Wings history spread throughout the arena representing the traditions and records over time.

Sophomore Public Relations major Breanna Sabin said, “I didn’t know what kind of public relations I wanted to get in to. This networking trip however made me realize that sports public relations could be a potential career option.”

Sophomore Broadcast Journalism major Molly Wells stated, “I now know how important it is to get involved in networking. I need to focus on expanding my skills and knowledge in order to appeal to potential employers.”

Networking allows students to see the variety of possibilities for a potential future career. Hearing from Kujawa, Rentner and Sanborn gave students the chance to visualize what happens in the sports public relations industry.

This entry was posted in Alumni, Events, Opportunities, Organizations, Students. Bookmark the permalink.
Skip to toolbar