“The size of Betsy Kling’s talent is matched only by the size of her heart,” noted John Betchkal at the annual Press Club of Cleveland Hall of Fame Awards on November 13. Kling, a 1997 BGSU broadcast journalism graduate, received the prestigious Chuck Heaton Award, which emphasizes sensitivity and humility, as well as journalistic talent. 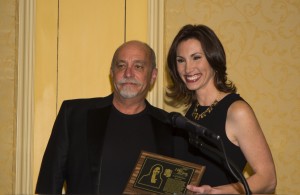 “It is an incredible honor to be mentioned in the same context as the legendary Chuck Heaton,” Kling said. “I never dreamed I would be recognized by my colleagues in this way.” Kling is Chief Meteorologist at WKYC-TV in Cleveland and also works with several community organizations, including the Red Cross, the Leukemia and Lymphoma Society and Rainbow Babies and Children’s Hospital. She is also currently working at ten Cleveland public schools to help fourth graders become “mini meteorologists.”

The award is named after Chuck Heaton, a former sports writer at The Plain Dealer who passed away in 2008. Chuck’s son Michael presented Kling with the award. 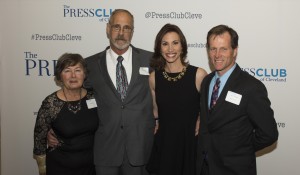 Betsy Kling poses with members of her family before the awards ceremony. Left to right: her mother, Sue; her father, Tim; Betsy; and her husband, Paul Thomas.

During her time at BGSU, Kling was among the group of students who started BG-24 News, the campus’ student-run television newscast. She minored in Meteorology while at BGSU, and later earned a certification in Broadcast Meterology from Mississippi State University. Prior to returning to her home town of Cleveland in 2003, she worked at stations in Ft. Wayne, Indiana, and Jacksonville, Florida. She has won three Emmys for her weathercasts, and she has also been recognized by the Ohio Associated Press.

In his introduction, Betchkal, who was the driving force behind creating the Chuck Heaton Award, summed up the traits that made Kling a natural choice for the honor:

In journalism terms, her five W’s and an H go something like this: weather forecaster extraordinaire; wonderful sense of humor; warm-hearted; willing to quietly, unselfishly help others; watchful, like a next-door neighbor for our well-being and safety on stormy days in this city; and the H that goes along with those five W’s is humble regarding all of the above.

Dr. Jim Foust, who was Kling’s adviser while she attended BGSU, was also at the ceremony and appeared in a tribute video shown before Kling was introduced. “Betsy was always very driven and she really worked hard,” Foust said. “It’s great that she has accomplished so much and done it while earning the respect and friendship of so many people along the way.” Kling was clearly touched by the response of her colleagues and family at the awards ceremony. “This is certainly one of the highlights of my career,” she said.

This entry was posted in Alumni, Alumni Achievements. Bookmark the permalink.
Skip to toolbar