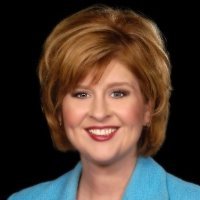 Alumna Amy Burkett has spent her life being what she describes as “a student of leadership.”

From the small town of Uhrichsville, Ohio, 35 miles south of Canton, she spent her high school years doing just about everything from marching band and choir to cheerleading and drama club.

When Burkett became a Falcon, she wasted no time jumping into the life of a heavily- involved college student writing for the BG News and joining a sorority.

After graduating on a Saturday in May 1990, Burkett began her first job on the following Monday at WHIZ-TV NBC in Zanesville, Ohio.

After spending 18 months in Zanesville, Burkett moved to Medstar Television, a nationally syndicated show based in Pennsylvania, which she describes as a pivotal point in her career.

“That’s where I learned to go from those short 90-second stories to the 5-minute stories with special effects and looking at complex issues that you don’t see on the nightly news,” Burkett said.

While hard at work showcasing products to over 150 channels, she also got to travel to places like Honolulu and Miami.

“I got to see the country on their money, but four years living out of a suitcase was more than enough,” Burkett said.

In 1999, began working at WLVT-TV PBS 39 in Pennsylvania, here Burkett lead a team to create a show called “Tempo!” which received 34 Emmy nominations as well as six wins.

Laura McHugh, who worked with Burkett at PBS 39, recalled accepting the award for her Mid-Atlantic Emmy.

“As I was standing on stage, I remember looking to my right and seeing Amy backstage jumping up and down and cheering for us,” McHugh said. “I really believe she couldn’t have been happier than if she had won the award herself.”

Burkett worked her way from production to host to vice president, but she had other plans. She wanted to be the general manager of a station, and when the opportunity presented itself, she went to North Carolina

Just before moving to North Carolina, though, Burkett and her family took a mission trip to Haiti to help those in need.

Currently, Burkett is the general manager at WTVI-PBS Charlotte. In her spare time, she creates YouTube videos that all have a great message or a boost of motivation for her viewers.

Her videos cover an array of topics, anywhere from chasing your dreams to the struggles of reaching your goals. She also has a series of videos about leadership lessons from different things such as Disney and Mary Poppins.

McHugh, her former colleague, said: “I would never be the reporter or producer I am today without Amy Burkett. She taught me the meaning of excellence in television, and when I struggle with a difficult ethical or editorial decision, I find myself asking, ‘What would Amy do?’”

What would Amy do?

When asked what advice she would give for remaining motivated after graduating, Burkett said, “Focus on learning and focus on being all that I can be to take all my experiences in college and continue to grow everyday.”

This entry was posted in Alumni and tagged Amy Burkett. Bookmark the permalink.
Skip to toolbar