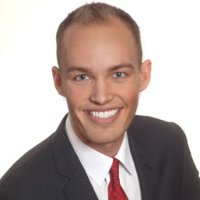 Matt Maynard has been able to travel the world and go to places he never thought he would see.

“A Valentine’s weekend in Paris? An impromptu vacation to Buenos Aires? I’ve been lucky enough to do it all,” the 2008 broadcast journalism graduate said.

Maynard, who is now a senior analyst of customer communications leading all the development of integration communications with customers at American Airlines in Dallas, Texas, loves every minute of his time at the airline.

“I joined the company right as it was merging with U.S. Airways to become the world’s largest airline, and that’s given me the opportunity to work on many great projects,” he said. “I really enjoy working for big companies and finding ways to solve big problems. Working at American Airlines has given me many opportunities to do just that.”

While a student at BGSU, Maynard said he wanted to be a broadcast journalist, but that changed soon after graduating.

Maynard said the awful hours and moving to a small, unfamiliar town were two things he thought were not for him.

“TV news was and will always be my first love,” Maynard said. “But coming out [of] college, I just wasn’t willing to commit to that lifestyle.”

Upon graduating, Maynard decided that pursuing a career in public relations would be the best fit for him.

“Deep down, I knew I always had a passion for finding stories and finding creative ways to tell them. I just never thought that skill could be used in other professions like public relations and marketing,” he said.

Two years ago, after working in the journalism field for over eight years and gaining experience in multiple industries, Maynard saw an opening in media relations at American Airlines and decided to apply.

“When I was finalizing my decision in January 2013 as to who I should hire, I asked myself, ‘Which of these candidate can help get our department where we want to take it?’ And immediately, Matt rose to the top of the list,” Castro said. “I hired Matt to join our Cargo team, and at that time, I knew he wouldn’t be in our department long – only because I saw how driven and talented he was.”

This drive that Maynard has is something Hagenbuch noticed while she had him as a student and believes it has contributed to his success thus far.

“He was focused. He knew what he wanted out of life and was naturally curious,” Hagenbuch said.

At American Airlines, Maynard has been able to apply his passions to his career in order to help promote the world’s largest airlines.

“In my role, every day I’m a reporter. I work across a global company and with senior leadership to determine what’s important, how to say it and how to share it,” Maynard said.

Even though working at American Airlines is his career, Maynard has another passion he has been able to pursue: “Big Brother.”

“Big Brother” is the CBS television series where contestants live in a house together and compete against each other for a chance to win $500,000.

“When I was in high school, a friend and I created a fan site for the show, and it grew to become so popular that we’re now considered to be part of the media,” Maynard said. “Alongside reporters from “Entertainment Tonight” and People, I’ve covered the show every summer as an entertainment reporter for more than 10 years.”

Maynard described his time as a reporter as simply “creating an opportunity out of a hobby.”

Brian Scheffler, a managing member at ScheffTech Productions, LLC, wrote a recommendation for Maynard about his efforts with “Big Brother.”

“Matt’s input during the designing and re-designing phases of our platform have been critical to allow for user-friendliness, while managing to keep the website new and fresh,” Scheffler said.

Now that Maynard has carried the BGSU alumnus status for almost seven years, he has several pieces of advice for students entering the public relations field.

“First, and most importantly, you have to know how to write…You need to be able to take something complicated and make it easy to understand,” Maynard said. “Secondly, diversify your skills. Nothing makes you more valuable than having a wide range of skills.”

Maynard attributes early writing assignments to some of his success, but said the confidence the journalism professors taught him was even more important.

“At BGSU, I learned to recognize my natural gifts and talents, and today, I work to maximize those in my career,” he said.

As far as what the future holds, Maynard is confident he will always be in a career that challenges him to the fullest.

This entry was posted in Alumni and tagged Matt Maynard. Bookmark the permalink.
Skip to toolbar