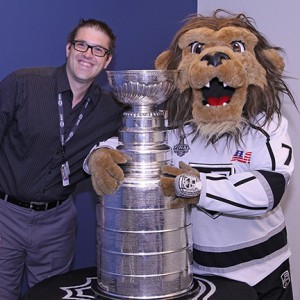 “I’m just a kid from Ohio,” said 2001 Bowling Green State University graduate Pete Stella as he sat in his office in Los Angeles on a clear and sunny day in the middle of February.

From The BG News to being the Digital Content Manager at FOX Sports West and Prime Ticket, Stella still thinks about his days at BGSU quite often.

“I went there [BGSU] as a high school senior and made the decision to come after that one night,” Stella said.

He said his time at The BG News aided him in his current job, as it “taught me how to do everything with a paper.”

One of his colleagues is Sid Saraf, who currently serves as an NFL editor for FoxSports.com and has countless great things to say about Stella.

In regard to when they worked together, Saraf said: “If Pete’s shift started at 5 p.m., he was there at 4:15, checking his emails and already diving into work. If you were bogged down with something, Pete volunteered to take work off your plate, no questions asked.”

These comments show just how much of an impact the man from Los Angeles by way of Bowling Green, Ohio, has had on those around him.

Nick Hurm, Stella’s friend and fellow BGSU graduate, said: “Stella has the passion of a sports fanatic mixed in with the sense of an experienced editor. He’s a fan that understands the kind of questions that are conversation starters and he knows how to communicate that with the writers he works with.”

Before landing in Los Angeles, Stella spent a decade in Florida working for several newspapers and for CBSSports.com, where he served as a staff editor.

Things are different out in Los Angeles, where he tells of the atmosphere that involves the potential of seeing celebrities every time he attends a Los Angeles Clippers game at Staples Center.

Stella, a Billy Crystal fan, recalled turning around at a game and seeing Crystal right behind him.

Life in Los Angeles has included trips to the Rose Bowl and even the 2014 BCS National Championship game that Stella recalled vividly.

He talked about how he was in the elevator heading to the field when Florida State’s comeback began against Auburn in the 2014 BCS National Championship Game.

He made it to the field, he said, and “watched the Florida State section erupt” when the team won the game.

While he has been able to take in these spectacular events, Stella could not help but bring up memories from his time at BGSU.

He recalled being in Urban Meyer’s first press conference at BGSU, which is a great memory for a self-proclaimed Ohio State fan.

Hurm recalled a game from 2000 when the BGSU basketball team won on a game-winning three-point shot.

“Stella writes down his observations, then calmly walks into a bathroom,” Hurm said.

After hearing cheers and screams come from the bathroom, “he walked out of the restroom with his reporter face on and headed to the postgame press conference,” Hurm said.

When asked to describe Stella, Saraf said, “This is the same guy who loves “Goodfellas,” texting me ‘Simpsons’ quotes at 11 p.m. and nerding out with novels from the ‘Star Wars Expanded Universe’.”

Hurm said GoodStella was the name of Pete’s weekly BG News column and it fit him perfectly.

Stella said he hopes to one-day move back to the East Coast; although admittedly, he said, he cannot complain about the experience in Los Angeles.

Not a bad life for a kid from Ohio.