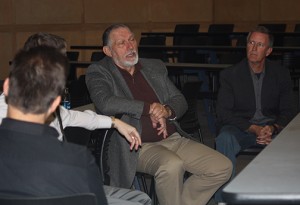 Lou Hebert and Paul Kwapich talk with students and faculty on Oct. 29.

Long time local television reporters Lou Hebert and Paul Kwapich shared their expertise  on Oct. 29 in an evening conversation with students that featured clips of their work.

Hebert has been a local journalist for more than 40 years. Most recently his documentary about the Maumee River, “Romancing the River,” aired on the Toledo Public Broadcasting System affiliate, WGTE-TV.

He has recently published a book, “Day By Day in Toledo.” His new book, “The Toledo Test,” will be published next year. He won a Peabody Award for his documentary about the Oakland County Child Killer (Detroit Metro). One of his Emmy awards was for a documentary done with Kwapich.

Kwapich is the chief photographer at WTOL-TV in Toledo, Ohio.  He has worked at WTOL for more than 25 years.

Kwapich has earned multiple Emmys for his news videography. And many of those were for work with WTOL’s Jerry Anderson or Chris Peterson on documentaries and other special reports.