Brendlinger to retire in May after 26 years at BGSU 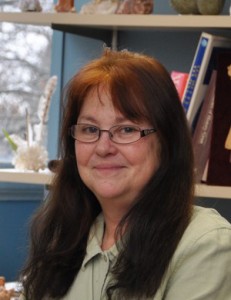 During one of the student trips to Paris led by Associate Professors Catherine Cassara and Nancy Brendlinger a student mistakenly put a sharp letter opener that he had bought as a souvenir in his carry-on luggage instead of his checked luggage.

While most chaperones would have made the student throw the letter opener away, Brendlinger understood the importance of the souvenirs to the student. She walked all the way back to the beginning of the airport with the student so that he could put the swords in his checked luggage and have a memento of his trip.

This small incident is representative of her career here. Brendlinger always takes the extra step with students and brings a global aspect into her classrooms.

Brendlinger’s office, filled to the brim with books and artifacts from her travels, will soon be empty. After 26 years at Bowling Green State University she will retire in May.

“I’m trying really hard not to make a whole lot of plans,” she said about retiring. “I want to see how it will work out.”

She said when she retires she would like to read, knit and continue to travel.

Brendlinger started her career as a reporter in Muscatine, Iowa. After three years, she joined Peace Corps in order to travel. After, she returned for a master’s degree in environmental journalism, but switched to Third World development communication. When she went on for her doctorate, her assistantship had her teaching journalism skills courses and that is when she fell in love with teaching.

Brendlinger has taught undergraduate courses in journalism that range from reporting and feature writing to global journalism and diversity in journalism. Her graduate teaching has included courses on development communication research methods and mass communication theory. For the past 15 years, she has also been involved with undergraduate International Studies Program, teaching both their course and their senior capstone seminar, as well as advising.

Brendlinger made many contributions during her time here at the university. She was the first woman tenured in the Department of Journalism and Public Relations. She was also the first woman chair, a position that she held for nine years.

Brendlinger said one of her biggest contributions was advising students. Beginning in 2005 she was the adviser for all the pre BSJ students.

Her advising of students was a huge time commitment and contribution, Bradshaw said.

“In faculty meetings she can be counted on to bring up concerns about how our decisions affect a range of students,” Bradshaw said.

Brendlinger has received two Fulbright Scholar awards and to date has visited 40 countries.

She obtained her first Fulbright for her work at Universitas Padjadjaran, Bandung, Indonesia, in 1992. There she taught three graduate and undergraduate courses concerning mass communication research and development communication.

She was awarded her second Fulbright fellowship to work in Slovakia in 1998-99. Here she worked for the Center for Independent Journalism in Bratislava.

She taught journalism courses at Comenius University in Bratislava and the University of Sts. Cyril and Methodius in Trnava. Brendlinger also helped run seminars and discussion groups with professional journalists at the center and worked with high school students.

Brendlinger said that because of her travels and living abroad she was able to bring on a global aspect to her teaching.

Abby Welsh, a 2014 alumna who took Brendlinger’s Public Affairs class her senior year, said that each year Brendlinger would pick a different topic for the senior class. Her senior year it was environmental science.

Welsh said Brendlinger would always bring in books and articles from different countries about issues concerning whatever they were doing in class. She would also bring in speakers that were really passionate about environmental science.

“She made sure she brought in stuff about her experiences that she did in the past,” Welsh said.

Welsh also recounted her experiences with Brendlinger as an adviser.

“She was always honest,” Welsh said, “One of the best advisers I ever had.”

Welsh said she would often go to Brendlinger just to talk and get advice. Brendlinger gave her advice on how to learn and how to grow, Welsh said.

Brendlinger’s experience with traveling and students also came into play when she assisted Cassara a few times overseas. They worked together on an environmental communication project in Tunisia and Algeria in 2008-2010 as well as for USAID in Croatia in 2004.

Brendlinger even helped Cassara in taking students to Paris for a study abroad opportunity every two years since 2004. Cassara really appreciated having Brendlinger’s traveling experience.

“I needed somebody that I could count on to help that wouldn’t go off on their own,” Cassara said.

Most of their trips involved working with students and Brendlinger understood that one person has to be the tail and one has to be the head when leading them, Cassara said.

As Brendlinger’s time at the university comes to a close it becomes clear that she leaves behind a position that will be hard to fill.

“Dr. Brendlinger is the heartbeat of the Department of Journalism and Public Relations,” Bradshaw said. “It’s the combination of her kindness, her generosity and her knowledge that I will so desperately miss.”