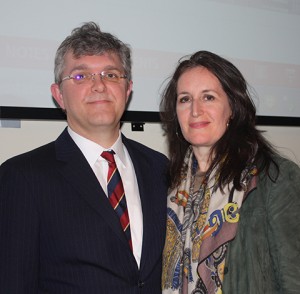 Jeffrey Bradford and Norah Lawlor
of Lawlor Media Group, a public relations firm in New York City. Lawlor was the 2016 Currier lecturer. Both she and Bradford talked earlier in the day with public relations students in the PR case studies class. Their visit was organized by instructor Julie Hagenbuch. Photo by Kelly Taylor.

Lawlor, who studied journalism at Carlton University in Canada where she also had her first job doing PR for fashion shows, was the 2016 Currier lecturer. The Currier lecture is made possible through the Florence and Jesse Currier Foundation in the department of journalism and public relations.

Lawlor said Canada was cliquey, which made her want to branch out, so she moved to New York despite not knowing anyone in the city. She eventually started her own public relations company, Lawlor Media Group.

Lawlor said she has the personality and the drive to seek out contacts and this has lead to her success.“You’re either great and you stand out or you’re just a publicist who no one remembers the next day,” she said.

Networking is what got her a short-term job as Michael Jackson’s publicist and her way into the Oscars.

Lawlor provided many real world stories and examples throughout the lecture and said she pushes to get what she wants.

“You’re constantly growing in this industry,” she said. “And, I really don’t take no for an answer.”