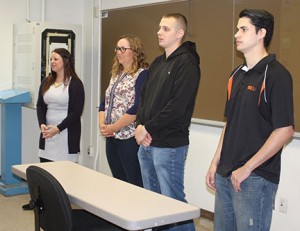 Student media and public relations leaders Hannah Tempel, Lily Bartell, Kyle Howard and Terry Lash tell what it is like to work in college student media during a question and answer session with high school journalists. (Photo by Kelly Taylor) 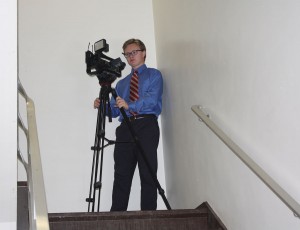 During the hands-on broadcast session, Patrick Arnold, a junior from Ottawa Hills High School in Toledo, sets up a shot in the stairwell of West Hall. (Photo by Kelly Taylor) 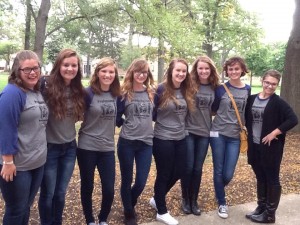 The staff members from Antwerp High School pose for a picture outside West Hall in their staff t-shirts prior to the start of the workshop on Oct. 13. Pictured (left to right) are Megaen Price, Faith McDorman, Erica Meyer, Kimberly Smith, Becca Johanns, Annie Miesle, Brittany Smith and Mikyla Boesch (Photo by Kathy Bradshaw)

Department of Journalism and Public Relations faculty members, along with Ohio Scholastic Media Association board members, taught 72 students from eight high schools. The students made choices among 18 sessions.

The sessions, conducted in BGSU’s West Hall classrooms and in the student union, focused on broadcasting, newspapers, photography, yearbooks and the Web. Students learned how to use specific tools such as InDesign, WordPress, Audacity, Thinglink and TimelineJS.

Patrick Arnold, a junior at Ottawa Hills High School, attended the hands-on broadcast session taught by Ken Garland, adviser to BG24 News. “The experience that I gained from the workshop at BGSU will not only help me this year in broadcast journalism, but hopefully also help enhance my news casting ability for the future,” Arnold said.

One session during the workshop featured a question and answer with BGSU student media and Public Relations Society Student Association leaders.

Lily Bartell, an editor on the Key magazine, said the high school students in the session were engaged, asked questions and seemed genuinely interested in what BGSU has to offer. “It was a valuable experience for me, too, because I was able to show off the student media organizations that I am a part of and proud of,” she said.

Kyle Howard, a senior broadcast journalism major who represented BG24 News, was an attendee of OSMA workshops when he was in high school. “I found them very rewarding,” he said. “We never had a student media session in the past when I attended these workshops, and I feel that allowing students to hear from college students about what a particular school has to offer can help that student see if that university is a right fit for that individual student’s interests.”

The highlight of the college media session, of course, was the chance to tour the facilities. “The students seemed very excited to see the BG24 News set and all of the CDs in the WBGU radio station,” Howard said. “Being able to see these facilities really brought the words of the student media members to life.”

The other students on the panel were Terry Lash, sports radio and BG24 News; Hannah Tempel, PRSSA; and Michele Mathis, BG News.

Kathy Bradshaw, chair of the department of journalism and public relations, talked with several advisers during the workshop. “It is the passion of the high school advisers that makes this so valuable for students,” she said.

BGSU’s Office Admissions covered the cost of student registrations. “We really appreciated the support of admissions,” Taylor said. “We had one school tell us they would not have been able to come to something like this if it hadn’t been for the free registration.”