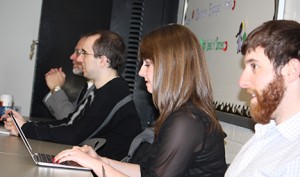 A panel of working journalists critique the senior broadcast and multiplatform capstone class projects. The panelists were (from the foreground) Andy Ouriel, ’10; Alyssa Widman Neese, ’12; Brian Szabelski, ’08; and Greg Backnis.

Starting in early March, each team chose a topic  then members conducted interviews, wrote stories, shot pictures, captured video and audio and put it all together in on a WordPress site.

On April 23, the groups presented their projects to a panel of reviewers, who provided feedback to each group.

The reviewers were Greg Braknis, Web news editor at The [Toledo] Blade; Andy Ouriel, 2010 alumnus and government reporter at the Sandusky register; Alyssa Widman Neese, a 2012 alumna and education reporter at the Sandusky Register; and Brian Szabelski, a 2008 alumnus and multimedia Web editor at The [Findlay] Courier. Itay Gabay, who teaches the social media class, also made comments.

The basics of the websites were set up by Jim Foust.   Kathy Bradshaw and Nancy Brendlinger taught the two courses.

Click on the topic of the project below to view the group’s website:
Sexual Assault on Campus
Local Food to Local Restaurants
Pitbulls
Militarization of Police