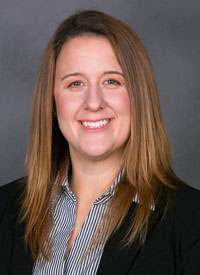 Mentioning how long her day has been, she orders a small coffee and sits down.

She is very soft-spoken, but keeps a smile and starts talking about journey in the journalism world.

A graduate and employee of BGSU, Cravens’ childhood led her to her collegiate experience and career path.

Cravens is from Fostoria, a small town about half an hour away from BGSU. The youngest of four, she grew up with two sisters, her brother and both her parents.

She played softball and volleyball in high school, on top of starting and developing a newspaper. It was that experience that made her realize that she wanted to go into the journalism field.

While in high school, she would frequently visit BGSU and watch the sports games. It was these factors that brought her to BGSU.

As an undergraduate, she left a lasting impression through her work. Kelly Taylor, a journalism professor at the university, recalled her time as a teacher and faculty adviser to Cravens nearly 10 years ago.

“She was self-motivated, reliable, and an excellent writer,” Taylor said. “She was exemplary as a student.”

Cravens was active in the journalism department, starting as a reporter for the BG News.

“I started out covering women’s tennis then kind of graduated a little bit of women’s basketball,” Cravens said. “I always felt really at home there.”

Her experience reporting for the BG News her first two undergraduate years led her to a number of different internships.

“I got my first internship at the Fostoria Review Times, the newspaper in my hometown. Then that was able to get me an internship with the Sentinel-Tribune here in Bowling Green. It started as a summer internship but it seems like I’ve been working there since then,” Cravens said.

It was her work at the Tribune that allowed Cravens to develop a solid portfolio. Soon after that, she graduated and eventually got a job as a courts reporter for the Findlay Courier, which was short-lived.

“That was pretty heavy stuff. When you’re the courts reporter nobody wants to be in your stories because you are usually not writing the nicest things about people, but somebody has to do it,” Cravens said.

After all that, despite having a successful start in the field, Cravens decided that journalism was not a career that she wanted to stay in.

In 2012, she returned to graduate school at BGSU to pursue a master’s in sport administration and continued to work part time for the Sentinel-Tribune. It was during this time she covered the BGSU volleyball teams NCAA Tournament appearance at Penn State.

She did not know it at the time, but covering that team would lead to her new career path.

“I watched them win their first ever NCAA volleyball match in program history so that was pretty fantastic. That was where I first developed my relationship with [head volleyball] coach Tomic,” Cravens said. “About a year later when the director of volleyball operations job opened, she remembered me from actually interviewing her in her press conferences at the NCAA Championships.”

Cravens was able to get a job back into a field she was familiar through the connections that she had made reporting. Throughout her career in journalism, Cravens stayed active in the sport she had played in high school.

For that reason, the job opening was fitting to her resume.

“Jordan was an outstanding DOVO for many reasons. She is very organized, hard-working and self-motivated person,” head volleyball coach Danijela Tomic said. “More importantly, she is a kind and loyal person who loves to help people.”

Cravens had a successful coaching stint from 2009 into 2012. From 2010 to 2012, she served as the assistant volleyball coach at Liberty-Benton High School, outside of Findlay, and won a Blanchard Valley Conference title and sectional championship.

“I loved [coaching],” Cravens said. “Coaching anything, especially the high school level, you’re not in it for the money. You’re definitely in it for making an impact in those kids’ lives. Its long hours and you do coaching on top of your full time work. You leave for work at 8 o’clock in the morning and don’t get home until 10 o’clock at night but it’s very rewarding.”

Staying at the university, Cravens accepted a new position in January as Assistant Director of Annual Giving. She said journalism is a strong base for any career since writing is so essential.

This entry was posted in Alumni and tagged BGSU, Jordan Cravens, Kelly Taylor. Bookmark the permalink.
Skip to toolbar