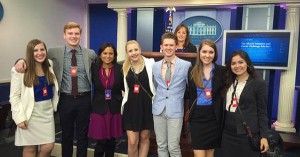 For six lucky BGSU public relations students, the White House came calling for them over fall break. Members of the Public Relations Student Society of America (PRSSA) attended the national PRSSA convention in Washington, D.C., Oct 9-10, but also made another key stop while in town.

The students were guests of Jackie Calmes, New York Times White House correspondent and a BGSU Currier Speaker last in April. When it was announced that the PRSSA National Conference would be held in Washington, PRSSA faculty adviser Julie Hagenbuch reached out to Calmes to see if the club could take a White House Press Room tour.

“We had it all arranged in the spring to go on the tour, but then the security breach occurred with the man jumping over the fence. It didn’t look like we’d be able to visit the White House at all,” she said.

The day before the trip, Calmes called with good news. Not only were they invited and cleared for the tour, they were offered an added bonus: to watch the president take off in Marine One on the South Lawn with the press corps.

On Oct. 9 students Becca Barth, Anna Crabill, Stevon Duey, Alexis Martinez, Lucas Stall, Kristen Tomins and Hagenbuch watched and waved to President Obama as he walked across the lawn to the waiting Marine One.

While on the tour, they were a part of the press briefing and networked with “Today Show” White House correspondent Kristen Welker in the “swamp,” the area where each network does live shots on the White House grounds.

“This trip was truly life changing,” said PRSSA president Lucas Stall, “an opportunity that rarely comes along. I’m so glad I was able to go with PRSSA and hope that future members get to take part in the same activities.”

The trip was paid for through the Student Budget Committee, part of the Office of Campus Activities.

This entry was posted in Media, Organizations, Students. Bookmark the permalink.
Skip to toolbar