This story is from Anthony Knopps, an adjunct instructor in the Department of Journalism and public Relations and Assistant News Director at WTVG-TV in Toledo.

Can you really teach journalism using a Budweiser ad?

The answer is yes. I’m just back from eight magical days in Hanoi, Vietnam. This was my second opportunity to work with VTV or Vietnamese Television. In August, I worked with their senior staff on how to identify and retain good employees and to improve their leadership abilities. A short time after that exercise ended, I was 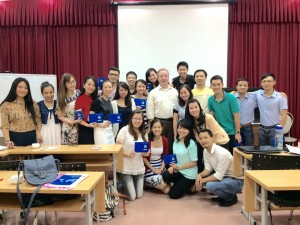 Anthony Knopps (center) poses with some of the journalists he helped train in Vietnam.

asked to return, but to teach “producing news for the 21st century.” Makes it sound like I would be working with producers, right? Wrong. I was fortunate enough to work with reporters from VTV4, their version of CNN. These correspondents are based, not just in Vietnam, but in such locations as Moscow and Paris.

As began gathering my notes before my departure, I began sketching out an eight-day curriculum that I thought would get them where they needed to go. We focused the heart of good reporting, which as you know, is storytelling. I led several exercises that built their skills in writing for the ear and writing for eye. We also went out in the field with the mission to “find a story that we often ignore.” What my “students” came back with was short of amazing. They found a noodle vendor who saw it her life’s mission to provide food for the less fortunate, they found a train crossing guard that took his work not as a job, but as a family’s responsibility, and we found a man who thought it important enough to beautify Hanoi that he worked above a busy street to make sure all the lights were working.

In all of these cases, the human element was front and center.

So where does Budweiser fit in? We looked at ways to make that connection with our audience and I played a series of Budweiser ads that the beer giant ran during the Super Bowl. In each case, they were looking at how the beer company made that emotional connection with its audience, the importance of doing so, and how that played into the overall success or failure of their stories.

I can honestly say that our lessons were successful in finding ways to make that connection. And it wasn’t just in their stories. On our final day, I remarked that we may have arrived as 19 separate individuals, but we are leaving as one cohesive unit that will have always shared a magical moment in time.

Even today, we are still connecting and I am counting down the hours when I can return to a land that is often misunderstood, but is special in its own way.

This entry was posted in Faculty, Trips. Bookmark the permalink.
Skip to toolbar